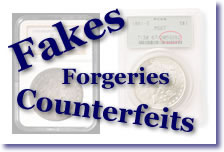 A news article today recounted how China’s leading online game operator, The9 Ltd., will begin suspending the accounts of players who steal and then resell virtual coins used within the extremely popular and worldwide online game, World of Warcraft®.

With a world subscription base of over 10 million players who each pay a monthly fee, the news is positive for that particular online community. But what about the real world where coins and their holders are counterfeited and then sold?

In recent months, two of the top coin certification companies have issued consumer advisories regarding counterfeit replica coin holders used to help sell fake or counterfeit coins through online auctions such as eBay®.

China is a large source for many of these counterfeited coins and holders. The PCGS announcement went as far as to say:

PCGS has contacted U.S. governmental agencies, including the FBI, U.S. Customs, the Secret Service, and US Postal authorities, to enlist their assistance in pursuing enforcement or legal remedies against these counterfeiters. Also, PCGS is a member of eBay’s CCW Group, which monitors eBay for fraudulent listings and asks eBay to discontinue auctions of suspicious coins and/or suspend violators.

PCGS has called for eBay to stop accepting listings of any rare coins from Chinese sellers. eBay recently pulled several auctions of counterfeit coins/holders at the urging of PCGS.

While new methods and measures will always be developed by the coin certification and online auctions companies to help in combating counterfeiting, wouldn’t it be great to hear directly from the Chinese government? A statement, say, similar to The9 announcement indicating that creating and selling fake coins and holders is not acceptable and measures will be taken against those who do?

If a leading Chinese online game operator knows the value in maintaining their reputation with subscribers and the public gaming world when it comes to virtual coins, shouldn’t it be easier to see the importance of doing the same in the real world?

Even with the strongest measures, theft and deceit will continue to plague portions of the coin collecting community. Collectors must always be vigilant. But it sure would be refreshing if at least an acknowledgment of a problem would be publicly stated by China.

Right now, unless I’m just in the dark, it looks like they’re simply turning a blind eye to it all.

For reference, the Xinhua News Agency article, The9 to punish virtual coin robbers, is embedded below.

All collector coins must be real coins not couterfeit! Buy only real thing not fake one, except restrikes of coins!