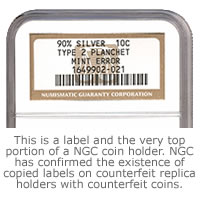 NGC was founded in 1987 to objectively provide third party grades to coins. Coins sent to NGC are analyzed, graded, recorded and then encapsulated in tamper resistant, protective holders.

While there are several coin grading services in existence, NGC is considered to be one of the top two – PCGS being the other.

Counterfeiting certified coin holders is not new. Those who do it and are willing to risk jail time victimize the unsuspecting buyer into paying a large amount of money for a coin that may also be counterfeit, or not at the grade the fake holder indicates.

According to the NGC announcement:

Coin collectors should visit the NGC information page as they offer excellent photo comparisons that show how to detect the forged coin holders. NGC also indicates:

"The next generation NGC holder to be released in 2008 has incorporated many new anti-counterfeiting features. Counterfeiting is a regrettable component of the collectibles hobby that affects not only certification companies but plagues world mints and currency printing bureaus. NGC will aggressively pursue all available legal remedy. Furthermore, NGC is wholly committed to investing in technologies and fraud prevention methods to continue to offer the safest and most reliable product in the rare coin marketplace."

Unfortunately, crooks are willing to go to extremes in stealing from the honest. Coin collectors must always remain diligent.