The New Mexico state quarter entered circulation yesterday and it was kicked off with its ceremonial launch held at the state’s capitol building in Santa Fe. 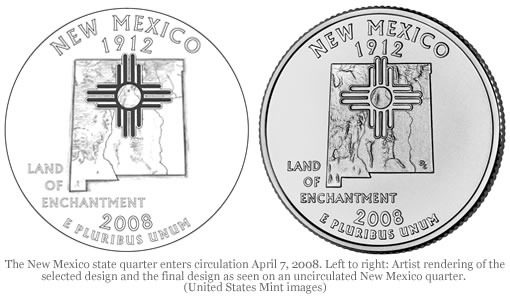 Along with hundreds of people, including children and the Santa Fe All-Stars, on hand for the ceremony were New Mexico Governor Bill Richardson and United States Mint Director Ed Moy.

Governor Richardson was quoted as saying,

“Today is an historic day for New Mexico, I am honored to launch our state quarter into circulation The New Mexico quarter showcases several of the unique features that help define our beautiful state, including the top two choices of the public- the world-famous Zia symbol and our beautiful landscape.”

“The New Mexico quarter’s Zia sun symbol design speaks to your State’s history and diversity. Your quarter will be immediately recognizable and serve New Mexico as an ambassador to the Nation.”

The Zia sun symbol reflects the influence of Native American cultures throughout New Mexico. According to its design description, 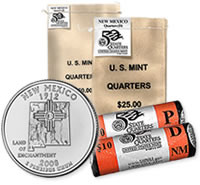 Children who were under 18 were given new quarters for free. At the conclusion of the event, the public lined up to purchase freshly minted $10 quarter rolls.

Roughly 500 million New Mexico quarters will be produced in around 10 weeks. It takes time for those to fully enter circulation mostly through banks. However, special U.S. Mint-sewn bags and two-roll sets of the New Mexico state quarters are now available for purchase directly from the Mint.

New Mexico’s quarter is the second of 2008, following Oklahoma’s. It was the 47th coin released in the U.S. Mints 50 States Quarters® Program, which coincides with it becoming the 47th state to enter the Union on January 6, 1912.

Still to come this year are quarters from Arizona, Alaska and Hawaii.