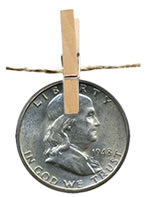 Art Cochell, a resident of Iowa, discovered a bounty of coins right in his own back yard and in a most unique location — his clothesline pole. The coins were apparently dropped down the pole by the previous owner.

The finds have not been described as terribly valuable, at least not yet, but imagine the excitement of each discovery.

Scott Niles from the Ottuma Courier reports the story in the article, Floris man finds coin collection in his backyard.

In it he describes how Mr. Cochell cut the pole down several years back and initially uncovered a few older silver coins that had fallen from the pole’s severed end.

What adds a touch of further excitement is the continuing discovery of more coins in the area of the old pole using a metal detector.

Regardless of the value of each coin, imagine their unique history and the simple joy of finding small coin stashes in your own back yard.