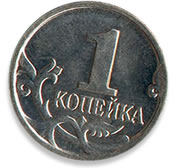 Russia could lose its smallest coin denomination, the one-kopek. The St. Petersburg Times reports the coin’s possible elimination was voiced by Arkady Trachuk. Mr. Trachuk is the General Director of Goznak, the Russian government agency responsible for printing banknotes and minting coins.

In parallel thinking, the reasoning is nearly identical to those who would like to see the U.S. Lincoln cent eliminated:

The elimination of the single kopek is not a done deal. There are apparently other proposals to consider, like using less expensive metals in making the coins. If that sounds familiar, it’s because the U.S. is also considering that quagmire in a newly introduced House bill.

When other countries have eliminated their smallest coin, they generally experience a time where prices for goods and services rise. The increases are the result of rounding prices to the next highest denomination.

While that is certainly a concern in the U.S., some economists in Russia believe their situation is different.

“If they get rid of the one kopek, it will not have a big impact. It has become so small, and inflation is on the rise,” said Tatyana Orlova, an economist at ING. “Many shops have [already] rounded up their prices … So if they take [the single] kopek out of circulation, it should not affect prices greatly.”

Given the current climate in the U.S., it would appear more likely that Russia would drop their smallest coin before the U.S.

About time for One Kopek Coins and U.S. One Cent Coins (Pennies) should be taken out of circulation. You can’t buy thing with One Kopek Coins or Pennies! More expensive to make than worth. Only logical thing to do is stop minting them!

I would like to write a short update for the news – Arkady Trachuk lately disproved the rumours about the elimination of kopek (the production of which is more expensive than their face value). Instead the coins will be minted from a cheeper metal. The General Director of Goznak stated that banks and stores are still using kopek in their daily operations with clients. The official announcement was published in “Rossiiskaya Gazeta” (Russian Gazette)- a newspaper established by the Russian Federation Government. http://dig4coins.com

Darrin Lee Unser - August 3, 2021 347
Two of the most anticipated numismatic releases of the year happen today after a delay from their initial June 1st scheduled appearance. At Noon...