A silver coin that was used to pay the half shekel head-tax to the Temple was found in the main drainage channel of Jerusalem from the Second Temple Period.

This coming Thursday, before reading the Scroll of Esther, all devote Jews will contribute a sum of money – “a reminder of the half shekel” – which is a tradition that took root in the wake of the ancient virtuous deed of paying a tax of one half shekel to the Temple. This sum, which was used in the past for the purpose of establishing and maintaining the temple, is translated into a contemporary amount and donated to the needy. 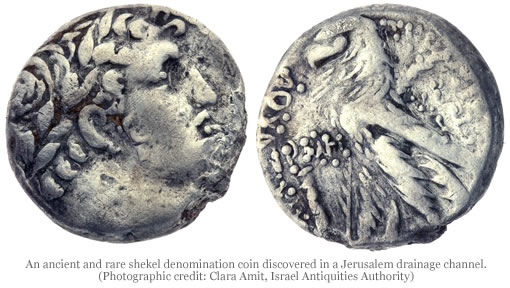 In an archaeological excavation that is being conducted in the main drainage channel of Jerusalem from the time of the Second Temple, in the City of David, in the Walls around Jerusalem National Park, an ancient rare silver coin was recently discovered. This coin is a shekel denomination that was customarily used to pay a half shekel head-tax in the Second Temple period.

Archaeologist Eli Shukron estimates that, “Just like today when coins sometimes fall from our pockets and roll into drainage openings at the side of the street, that’s how it was some two thousand years ago – a man was on his way to the Temple and the shekel which he intended to use for paying the half shekel head-tax found its way into the drainage channel”.

At the time of the temple’s construction, every Jew was commanded to make an obligatory donation of a half shekel to the edifice. This modest sum allowed all Jews, of all economic levels, to participate in the building the Temple. After the construction was completed, they continued to collect the tax from every Jew for the purpose of purchasing the public sacrifices and renewing the furnishings of the Temple.

It was most likely a sheqel of Tyre that Jesus and Peter used to pay the Temple head tax (a half sheqel each): “Go thou to the sea, and cast an hook, and take up the fish that first cometh up; and when thou hast opened his mouth, thou shalt find a piece of money. That take, and give unto them for me and thee” (Matthew 17:27). Moreover, Tyrian silver coins probably comprised the infamous payment to Judas Iscariot, when “they covenanted with him for thirty pieces of silver” (Matthew 26:15).

The annual half shekel head-tax was donated in shekels and half shekels from the Tyre mint where they were struck from the year 125 BCE until the outbreak of the Great Revolt in 66 CE. At the time of the uprising, the tax was paid using Jerusalem shekelim, which were specifically struck for this purpose.

In the rabbinic sources, the Tosefta (Ketubot 13:20) states “Silver mentioned in the Pentateuch is always Tyrian silver: What is Tyrian silver? It is Jerusalemite.” Many have interpreted this to mean that only Tyrian shekels could be used to pay the half shekel head-tax at the Jerusalem temple.

The shekel that was found in the excavation weighs 13 grams, bears the head of Melqart, the chief deity of the city of Tyre on the obverse (equivalent to the Semitic god Baal) and an eagle upon a ship’s prow on the reverse. The coin was struck in the year 22 CE.

Despite the importance of the half-shekel head-tax for the economy of Jerusalem in the Second Temple period, only seven other Tyrian shekels and half shekels were heretofore found in the excavations in Jerusalem.

It serves as the leading professional body for the study of the archaeology of Eretz-Israel. It preserves, conserves and study the archaeological heritage of the country at the highest scientific level, and maintains a balance between development needs and antiquities preservation.

Where can I purchase this Half Shekel Silver Coin of Ancient Israel? What price this coins are sold for? What condition this coin is in, very good, fine, very fine, extremely fine, or about uncirculated?

Where can I purchase this Half Shekel Silver Coin of Ancient Israel? What price this coins are sold for? What condition this coin is in, very good, fine, very fine, extremely fine, or about uncirculated?

hi josephene ……. i read your comment and same hear i found one also but haven’t had the time to take it in………i see that the date on your comment is years ago and i was wondering what kind of luck you had?/// please and thank you.

This article says ancient and rare. I have had a coin that looks just like this for 50 years. I have never had it authenticated or anything like that…. does anyone know just how rare and valuable it is? I have never investigated it’s value. it may not look quite as good as the one pictured but it is very close.