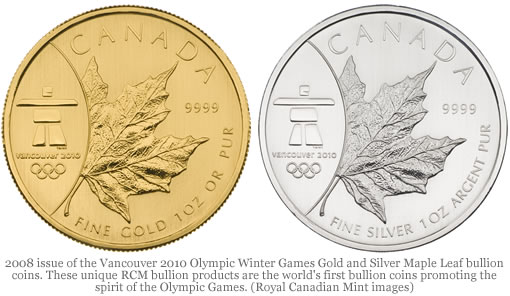 The RCM’s Ottawa facility will produce up to 50,000 coins in gold for the 2008 issue and the silver version will be produced on demand. Two more annual issues (2009 and 2010) will follow.

In July 2007, the RCM received permission from the International Olympic Committee and the United States Olympic Committee to produce and market these new gold and silver bullion coins. The designs for these coins were first unveiled in August 2007.

"Gold and silver have long symbolized the pinnacle of international athletic competition and we are delighted that the Royal Canadian Mint’s world-renowned bullion coins are now associated with the Olympic Movement." 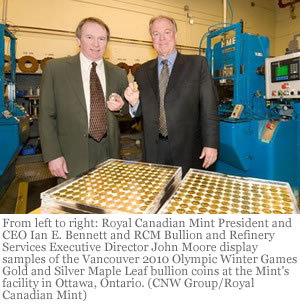 The Vancouver 2010 Olympic Winter Games Gold Maple Leaf bullion coin is made of one ounce of 99.99% pure gold and bears a $50 face value. Bearing a $5 face value, the Vancouver 2010 Olympic Winter Games Silver Maple Leaf bullion coin is struck from one ounce of 99.99% pure silver. Both are now available through the RCM’s extensive network of bullion dealers.

The Royal Canadian Mint, which is celebrating its 100th anniversary in
2008, is the Crown Corporation responsible for the minting and distribution of Canada’s circulation coins. An ISO 9001-2000 certified company, the Mint is recognized as one of the largest and most versatile mints in the world, offering a wide range of specialized, high quality coinage products and related services on an international scale. For more information on the Mint’s history, its products and services, please visit www.mint.ca.

About the Vancouver Organizing Committee (VANOC)

About the International Olympic Committee

The International Olympic Committee (IOC), created in 1894, is a non-governmental organisation with volunteer members who represent its work around the world, and an administrative staff based in Lausanne, Switzerland.

The IOC and its 203 National Olympic Committees worldwide promote the Olympic Movement, whose vision is to contribute to building a peaceful and better world by educating youth through sport. In addition to selecting the host city and coordinating the staging of the Olympic Games, the IOC and NOCs collaborate with a range of organisations and their members in the public and private sectors to place sport at the service of society. The main goal is to promote the values of Olympism, which include excellence, respect and friendship.

What is issue price for Olympic Maple Leaf Silver and Gold Bullion Coins? How can I purchase this coins?

Mike, I’ve already purchased and received from Canada’s “Royal Canadian Mint” their 2007 $300 Premium Gold Coin, “Olympic Ideals” and their 2008, $300 Premium Gold Coin, “Competition”. The last coin that I will be able to purchase will be their 2009 $300 Premium Gold Coin, “Friendship”. These coins are 14-Karat Gold having the composition of 58.33% gold and 41.67% silver. They each weigh 60 grams while their diameter are each 50mm. The edges are serated and the finish is bullion quality. Originally introduced last year at $1499.95 CDN each, the RCM guaranteed that set price over the three year span… Read more »