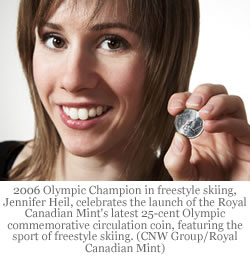 The Royal Canadian Mint today officially released the second Olympic 25-cent circulation coin of 2008. The sport of freestyle skiing is depicted on the coin, which is the seventh of 17 circulation coins to celebrate the Vancouver 2010 Olympic and Paralympic Winter Games.

“With less than two years before Vancouver hosts the world for the Olympic and Paralympic Winter Games, the excitement and anticipation is building from coast to coast to coast,” said Ian E. Bennett, President and CEO of the Royal Canadian Mint.

“This newest commemorative circulation coin, featuring the dynamic sport of freestyle skiing, is yet another way for Canadians to collect a piece of the Games.”

“We are proud and excited to have our sport as part of the Mint’s Olympic commemorative coin program,” said Peter Judge, CEO of the Canadian Freestyle Ski Association. “The Royal Canadian Mint is doing a great job keeping sport front and centre in the eyes of Canadians.”

Up to 22 million 25-cent freestyle skiing coins will enter into circulation today and will be available exclusively at RBC Royal Bank and participating Petro-Canada gas stations. RBC is a Premier National Partner and Petro-Canada is a National Partner of the Vancouver 2010 Olympic and Paralympic Winter Games.

Canadians can also look for these special coins in their change. Participating Petro-Canada gas stations will also sell freestyle sport cards, containing a uniquely painted version of the coin. The sport cards, which are now available, sell for $7.95.

Started by skiers who were looking for a more creative way to express themselves and compete at the highest levels, the first Freestyle skiing competition was held in New Hampshire in 1966. The sport made its Olympic debut as a demonstration sport two decades later at the Calgary 1988 Winter Games.

The Freestyle discipline of Moguls was accepted as an official medal sport at the Albertville 1992 Winter Games, followed by Aerials at the 1994 Winter Olympic Games in Lillehammer – where, in the moguls competition, Jean-Luc Brassard won the first Olympic gold medal ever by a Canadian male in a skiing event.

The newest Olympic Winter Games event, Freestyle Ski Cross, will make its debut in Vancouver in 2010, where both men and women will compete in all three freestyle disciplines. Canada has a proud Olympic history in freestyle skiing, having won ten Olympic medals in the sport, including four gold medals.

Designed by Canadian artist Glenn Green of Vancouver, BC, the freestyle skiing circulation coin features a freestyle skier in the centre, a stylized maple leaf and the words ‘Vancouver 2010’. The obverse features the portrait of Her Majesty Queen Elizabeth II, rendered by Susanna Blunt.

Canadians can look forward to three more Olympic Winter Games themed circulation coins in 2008: two 25-cent coins will feature the sports of figure skating (September 10th) and bobsleigh (October 29th), while the 2008 Lucky Loonie will be launched on July 23rd.