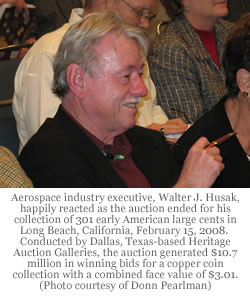 The trend of a busy opening day continued at the February 14 – 16, 2008 Long Beach Coin, Stamp & Collectibles Expo.  Total attendance for the three-day show, including dealers and the general public, was 5,206, according to Ronald J. Gillio, Expo General Chairman.

“We’ve seen this developing trend the past few years with strong attendance on Thursdays when the show opens to the public.  There are serious collectors who apparently don’t want to miss anything,” said Gillio. 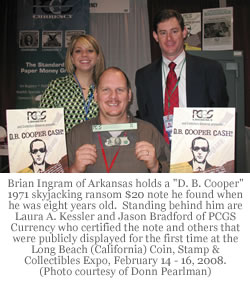 Some of the $20 bills recovered from the legendary 1971 “D.B. Cooper” skyjacking were displayed at the show by PCGS Currency for the public to see in person for the first time.  Brian Ingram of Arkansas, who was eight years old when he found the bills along the Columbia River near Vancouver, Washington in 1980, attended the opening of the show to see the historic notes on display.

Nearly a dozen educational programs were conducted during the show.  The Professional Numismatists Guild launched its recently announced Share the Knowledge consumer education series with a presentation by Jeff C. Garrett and Douglas A. Winter on U.S. gold coins; eBay consultant Troy Thoreson discussed buying and selling on eBay; and Professional Coin Grading Service President Ron Guth conducted a program about the history of coin grading. 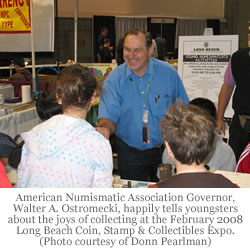 About 100 children participated in young numismatists activities on Saturday coordinated by the Full Step Jefferson Nickel Club and by American Numismatic Association Governor Walter A. Ostromecki.

The Long Beach Expo is a division of Collectors Universe, Inc. (NASDAQ: CLCT).