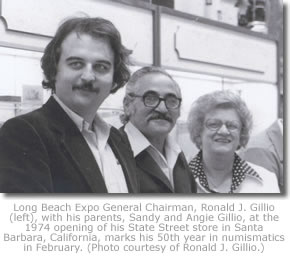 "It was early 1959 when I saw my first Lincoln Memorial cent, the first year they were made, and I was curious about it.  Ever since then numismatics has been a vital and enjoyable part of my life," said Gillio.

Gillio said his Mother and Father, Sandy and Angie Gillio, were very supportive of his hobby, and were with him to celebrate the opening day of his first store on State Street in Santa Barbara, California in 1974.

"It all started with just one new penny in my hands 50 years ago in February 1959.  What will the future mean to other collectors with this year’s four new penny designs?"

One of the highlights of the February Long Beach Expo will be the first West Coast appearance of the Sunnywood’s "Somewhere Over the Rainbow" set of exquisitely toned Morgan silver dollars.  The colorful, 97-coin set will be displayed at the booth of the Professional Coin Grading Service. 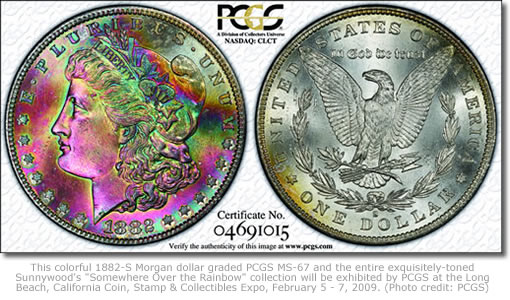 More than 1,000 dealers will be buying and selling rare coins, paper money, stamps, postcards, historic documents, antiques, estate jewelry and other collectibles at the show. Some dealers will provide free, informal appraisals for visitors. Young numismatists’ activities, including a children’s treasure hunt, will be held on Saturday, February 7.

A free gold coin door prize will be awarded each day to a lucky, registered visitor.

A half dozen educational seminars about collectibles and hobby club meetings will be conducted during the show, and Heritage Auction Galleries of Dallas, Texas, the world’s largest collectibles auction house, will hold a public sale of U.S. and world coins and paper money

General admission is $6 (good for all three days); $4 for members of any coin or stamp club who display a valid membership card; and $3 for seniors 65 and older. Free admission for children ages seven and younger. Discount admission coupons are available online at www.LongBeachShow.com.