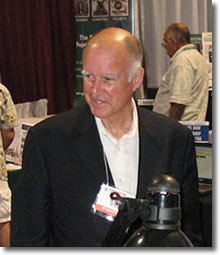 "Gold jumped about $40 an ounce on opening day, and we saw many ‘new faces’ among the thousands of attendees.  Thursday is usually a busy day, and attendance this time was about 20 percent higher than recent, previous opening days," said Ronald J. Gillio, Expo General Chairman.

"I’ve had a table at every Long Beach show since 1995, and this was my best opening day Thursday," said Peter Walters of Columbia Collectibles in Irvine, California who specializes in Civil War to World War I era items.

Several hundred children took part in a Saturday "treasure hunt" at the show.  Among the free numismatic gifts given to the participants were more than 100 modern proof and mint sets donated by collector Dennis Riley of Maryland, according to Walter A. Ostromecki Jr., coordinator of the show’s youth activities.

A coin collector, Attorney General Brown walked the bourse floor for about an hour on Friday, September 19, accompanied by American Numismatic Association President Barry Stuppler and ANA Executive Director Larry Shepherd.  He then met with collectors and dealers in an informal question and answer session organized by Stuppler in his role as President of the California Coin and Bullion Merchants Association.

Long Beach Mayor Foster was among the many visitors to the show on Saturday, September 20.  An enthusiastic "fan" of the S.S. Central America sunken treasure history, he posed for a photo with Gillio as they jointly held a 149.35-ounce Harris, Marchand & Co. gold ingot recovered from the 1857 shipwreck.  It was sold to an unidentified buyer for $375,000 and displayed at the show by Monaco Rare Coins.  Mayor Foster also briefly met with numismatic conservationist, Bob Evans of Ohio, who served as chief scientist on the 1980’s mission that located the shipwreck and retrieved the California Gold Rush cargo.

A half dozen club meetings and public educational seminars were conducted during the show including another in the continuing "Share the Knowledge" series by the Professional Numismatists Guild.  PNG member Greg Rohan, President of Heritage Auction Galleries, discussed "Everything You Wanted to Know About Rare Coin Auctions."

Four exhibit awards were presented on behalf of the Long Beach Coin Club: First Place ($100 award) and Second Place ($75 award) in the U.S. exhibit category went to Andrew Woodruff for "Two Signatures of C.W. Landis, San Diego Bank Note Signator" and "Ships on Five Denominations of United States Currency" respectively.  First Place ($100) in the world/foreign category was given to Mike Ontko for "The Spring of Hope and the Winter of Despair: Selected Coins of the French Revolution, 1789 – 1799," and Second Place ($75) went to Robert Wu for his exhibit, "Central Bank Notes of the Republic of China (Taiwan)."