(Long Beach, California) – Professional Coin Grading Service (PCGS at www.PCGS.com) will display a spectacular collection of early U.S. half dollars, offer special discounts for coins submitted for authentication and grading, and give collectors and dealers an opportunity to have their coins digitally imaged with the PCGS TrueViewTM photo service during the Long Beach Coin, Stamp & Collectibles Expo (www.LongBeachExpo.com), February 4 – 6, 2010. 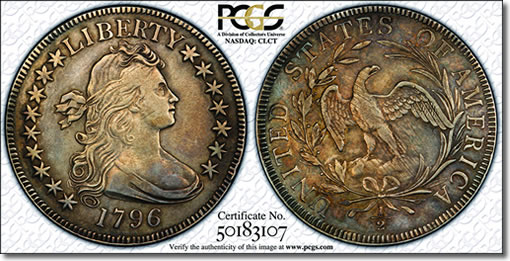 CLICK TO ENLARGE: This 1796 half dollar with 16 stars, graded PCGS AU50, is one of the highlights of the Dale Friend collection of early American half dollars that will be displayed by Professional Coin Grading Service at the Long Beach Expo, February 4 – 6, 2010.
(Photo credit: PCGS)

Visitors will also see a $10 million "Ship of Gold" exhibit of sunken treasure recovered from the fabled SS Central America that sank in a hurricane in 1857 while carrying tons of California Gold Rush coins and ingots.  The acclaimed "Ship of Gold" display is housed in a 40-foot long representation of the ship’s hull," and is coming out of "dry dock" for this special exhibit at the February Long Beach Expo.

The show will be held in the Long Beach, California Convention Center, 100 S. Pine Ave.

PCGS will display more than 100 high-grade coins from the award-winning Dale Friend collection of circulation strike early half dollars, 1794 – 1839, and his set of major varieties of early U.S. halves.  Both sets have earned the honor of being the number one-time finest in their category in the PCGS Set RegistrySM.

"Collectors and dealers who saw these sets displayed by PCGS at the recent FUN show in Orlando were simply awe-struck by the gorgeous, original toning and luster of these coins," said Donald E. Willis Jr., President of PCGS.  PCGS and the Long Beach Expo (Expos Unlimited) are divisions of Collectors Universe, Inc. (NASDAQ: CLCT).

"Twenty of the coins are either the finest known or tied for the finest ever graded by PCGS.  This is an opportunity for West Coast collectors to see them in person through the courtesy of Dale Friend," said BJ Searls, PCGS Set Register Manager.

Collectors and dealers also will have the opportunity to have their PCGS-graded coins digitally imaged with the PCGS TrueViewTM photo service on Thursday, February 4, and until 3 p.m. on Friday, February 5.  The onsite coin imaging will be offered in conjunction with any PCGS show service except for crossovers.  PCGS-graded coins also can be submitted for imaging only.  The price for TrueView imaging is $50 per coin.

Visitors to the PCGS booth, #807, can pick up a free copy of the first edition of the new quarterly booklet from the PCGS Million Dollar Coin ClubTM.  It provides rankings and information for the 210 United States rare coins that have sold at auction for $1 million or more, or would sell for that much if offered, according to experts’ opinions.

The PCGS Million Dollar Coin Club was created to celebrate the historic rare coins that have crossed the million dollar mark since May 1996 when the Eliasberg 1913 Liberty Head nickel became the first U.S. coin sold for over $1 million in a public auction.

"Our estimate for the total current value of these 210 United States coin rarities is $475,515,000," said David Hall, PCGS Co-Founder and President of Collectors Universe, who is among the pricing consultants who prepared the list.

Rankings and information in the PCGS Million Dollar Coin Club will be updated every three months online at www.PCGS.com/Million-Dollar-Coin-Club and in a printed, full-color educational booklet when more coins reach that mark and others already in the "club" bring new prices at upcoming auctions.

A complimentary copy of the illustrated booklet can be obtained at the PCGS booth at the Long Beach Expo.  PCGS Customer Service representatives will be available at the booth to answer questions about products and services, and to accept submissions for all levels of service.