Five hundred collector coins from the Royal Australian Mint will have the trip of a lifetime in a commemorative flight over the Antarctic to mark the centenary of the attainment of the South Magnetic Pole. At their recent 2009 product launch, the Royal Australian Mint released its third coin in their Polar Series – Antarctic Explorers. Today [17 Jan.] this coin is fittingly onboard the South Magnetic Pole Centenary Flyover, organised by the Royal Society of Victoria. 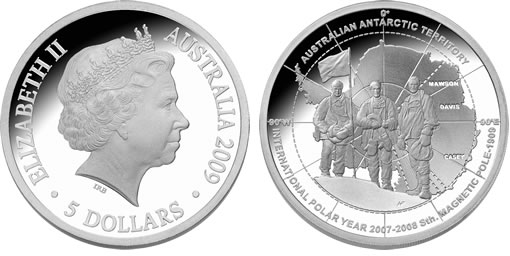 In recognition of the centenary, the Antarctic Explorers coin features members of the 1907-09 Earnest Shackleton Expedition: Sir Douglas Mawson accompanied by Tannat Edgeworth Casey and Forbes Mckay, who were the first group to reach the South Magnetic Pole.

"This is a very significant anniversary for the nation. It was the beginning of Australia’s exploration and involvement with Antarctica. The journey also showed such courage and determination amongst the explorers," Acting Chief Executive Officer Graham Smith said, who is onboard the flyover.

"To further commemorate this centenary, the coins flying over the Antarctic today will be presented in special montages and available for purchase to the public later this year. It will be a unique opportunity to own a piece of history," Mr Smith said.

HRH Prince Richard the Duke of Gloucester will be among some of the special guests onboard the flight. Keen coin collectors and history and science enthusiasts should keep on the look-out for this limited edition product!