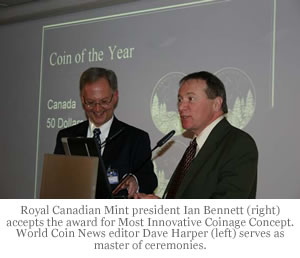 Canada’s destiny was in the stars as it won the 2008 Coin of the Year Award sponsored by World Coin News, a monthly periodical dedicated to collectors of world coins.

A four-piece set of $50 palladium coins showing the Big Bear and Little Bear constellations in changing seasonal positions was voted the winner in the second round of balloting by an international panel of judges. They are KM-672-675 in the Standard Catalog of World Coins identification system.

This year for the first time a People’s Choice Award was selected by more than 100,000 coin enthusiasts worldwide, who voted online at NumisMaster.com.  The award goes to the Hungarian Mint for its copper-nickel 50-forint that commemorates the 50th anniversary of the 1956 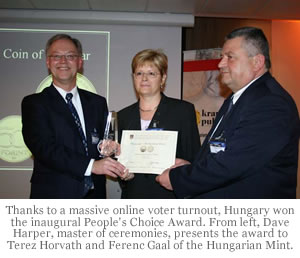 Hungarian revolution. It is KM-789.

“The COTY award recognizes the artistic and historic significance of coins worldwide,” said David C. Harper, editor of World Coin News. “Each coin honored tells a unique story that will be shared for generations to come.”

Harper also noted the involvement of coin enthusiasts who were asked to vote for the first People’s Choice Award.

“We saw a lot of national pride exhibited as the votes came in,” Harper said.

The 2008 Coin of the Year award program recognizes coins dated from the year 2006.

It also honors a winning coin in each of 10 subsidiary classes. Where the United States shone was in the Most Historically 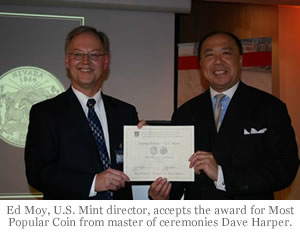 Significant category where a commemorative silver dollar depicting Benjamin Franklin as an old diplomat and struck to mark the 300th anniversary of his birth, won the vote. It is cataloged as KM-388.

The U.S. Mint also topped two other categories with the Nevada state quarter, KM-382, showing galloping mustangs, the wild horses of the area. The copper-nickel coin was named by the judges to be the Best Trade coin, meaning that it circulates, and Most Popular, which often boils down to sheer mintage numbers.

Canada’s winning entry for the COTY also won in the Most Innovative Coin category.

A tie in the Most Inspirational category gave the Royal Canadian Mint its other honor with its silver $5 coin with a colorized pink ribbon called “Imagining a World without Breast Cancer,” KM-658.

Finland joined in the tie with a Nordic gold 5-euro coin, KM-123, that celebrates the 150th anniversary of the demilitarization of Aland Island.

The Best Silver Coin honor was taken by Japan for its commemorative marking the 50th anniversary of the country being admitted as a full voting member of the United Nations. The colorized silver coin has a denomination of 1,000 yen. It is cataloged as Y-138.

France triumphed in the Best Crown field with a gold 10-euro commemorating author Jules Verne’s “Five Weeks in a Balloon.” The coin, KM-1450, marks the 100th anniversary of the death of the popular writer.

Latvia’s fight for freedom from the Russian state in 1918 is the theme of the winning silver 1 lats coin, KM-82, that took the top spot in the Best Contemporary Event category. This covers events of the past 99 years.

Most Artistic honors went to Denmark and its 10 kroner commemorating Hans Christian Andersen’s “The Snow Queen.” The aluminum-bronze coin is KM-903.

With the advent of the People’s Choice Award, these 10 coins and an additional five were put online at www.Numismaster.com for voting. The extra five coins, which registered well in the judges’ voting but did not win their categories, are a silver 15,000-kip coin of Laos called the Laos Mazu, the goddess of safe sea travel, KM-98; Australia’s silver $1 coin showing “Australia on the Map,” KM-839; Hungary’s copper-nickel 50-forint marking the 50th anniversary of the 1956 uprising, KM-789; Poland’s silver 20 zlotych, Y-533, which shows a multicolored holographic spider web; and Germany’s Schleswig-Holstein 2 euro, KM-253.

The awards were presented Saturday, Feb. 2, during a ceremony at the World Money Fair in Berlin, Germany.