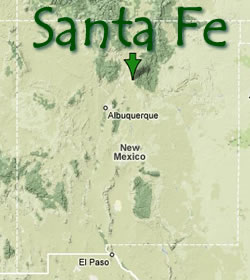 Santa Fe, New Mexico, the site of native occupation centuries before European incursions, was officially elevated from a plaza established in 1608 to a villa and capital city in 1610. It’s also the home to the oldest and continuously inhabited indigenous communities in North America.

Two bills were concurrently introduced into the House and Senate and each has been referred to committee. If a reconciled bill passes and is signed into law, a commemorative $5 gold piece and a $1 silver dollar would be minted for coin collectors in 2010.

The two introduced bills have the same intent, but are composed slightly different:

While there’s no sign yet on whether either bill will ever leave its respective committee, it’s worthwhile to glance at what’s proposed.

(1) IN GENERAL- The design of the coins minted under this Act shall be emblematic of the settlement of Santa Fe, New Mexico, the oldest capital city in the United States.

(C) inscriptions of the words ‘Liberty‘, ‘ In God We Trust‘, ‘United States of America‘, and ‘E Pluribus Unum‘ on the obverse or reverse.

To date, no specific guidelines or recommendations for either coin’s design – images, portrait(s), etc., for their front and back – has been provided within either bill. Generally, that’s typical for coin legislation and design. The very general, normal provisions are:

(1) selected by the Secretary after consultation with the Commission of Fine Arts; and