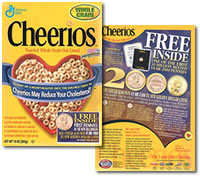 Buying a box of Cheerios® in January of 2000 bought you more than a good breakfast. You were given one shot at a very special Sacagawea golden coin.

Just a dollar you say? Not quite. These Cheerios dollars are now being sold for several thousand dollars each.

You likely remember the introduction of the Sacagawea golden dollars back in 2000. It’s hard not to remember. The U.S. Mint spent $53,000,000 that year on marketing and advertising just to get your attention.

Blasting 12 uniquely made 22-karat gold Sacagawea’s coins into space was certainly an interesting promotional adventure. The special proof coins were sent up on Space Shuttle Columbia in the middle of 1999 – many months before the coins were introduced into circulation.

Like the space Sacagawea’s, the cereal boxes were on grocery shelves before any of the new coins made it into circulation. Big deal? Yes. During January of 2000, the ONLY place to get a brand new golden dollar was in a Cheerios box. (The coins weren’t released to Federal Reserve Banks until late January.) 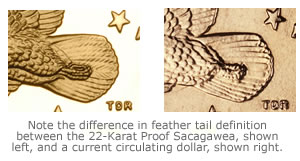 Why the Sacagawea Cheerios dollars are treasures – different and valued

The early release of the golden dollars helped create tremendous buzz, but it also forced the Mint to move quick.

General Mills had to have the coins before 2000 so they could have enough time to package them within the various Cheerios boxes and get them onto shelves by January.

And here’s where it gets interesting. The pennies were delivered fine. In fact, so were the 5,500 Sacagawea dollars. However…

The Mint later changed – ever so slightly – the design for the circulating coins. Unlike the new circulating Sacagawea coins that would go to banks and the public, the Cheerios Sacagawea dollars had the same reverse design as those earlier proof, 22-karate space coins.

And because only 5,500 Cheerios dollars were made, they’re very rare and valuable – unlike the over one billion other circulating Sacagawea’s produced in 2000.

What’s the official story? According to the statement from the U.S. Mint released June 17, 2007, by spokeswoman Joyce Harris,

“5,500 Golden Dollars of a ‘high detail’ feather variety (12 tail feathers) were manufactured and shipped to General Mills as part of the Golden Dollar promotion in October 1999, under a detailed arrangement that they not be released until January 2000. Prior to manufacturing the coins for release to the Federal Reserve in 2000, the feather detail was softened and the center tail feather was recessed to solve a die manufacturing issue. Recessing the center tail feather gives the illusion of a 13th feather, but that was not the intent.”

How much are the Sacagawea Cheerios dollars really worth?

The Mint quote was provided in a Coin World article from their November 12, 2007 issue. In that article, they also discuss how a collector on eBay paid $9,999.99 for a 2000-P Sacagawea (Cheerios dollar) graded PCGS MS-66.

On August 10 of this year, a Cheerios dollar was also auctioned by Heritage Auction Galleries for $11,500 in the grade PCGS MS-67. (If you have a Heritage account, you can view that coin’s details here.)

If you’re lucky enough to have one of these Sacagawea Cheerios dollars and it’s in reasonable condition, it’s worth several thousand dollars. If you’re a gambler or enjoy auctions, you can sometimes find the coins or the original Cheerios boxes in auctions like eBay. In fact, there’s one listed today*, November 12, with a current bid of $20.49.

Interesting facts regarding the Sacagawea dollar*

Here are some facts about the Sacagawea dollar Cheerios program:

These are interesting 2000 Sacagawea manufacturing facts and survey results:

* Taken from the United States Mint’s Report to Congress, On the Marketing of the Golden Dollar, March 30, 2001

In the end, Sacagawea’s aren’t fairing well in public use

This year and next, only collector versions of the coins will be minted. There isn’t the demand for them with over 100 million Sacagawea dollars still in vaults and the hundreds of millions Presidential $1 coins now being minted

Designs changes are coming for the Sacagawea coin in early 2009 and a new law mandates equalized production numbers compared to presidential dollars. That’s something coin collectors will enjoy but it’s not likely to increase their usage in every day transactions.

The dollar bill is simply too dominate and it’s the real competitor and dollar coin killer.

[…] week’s CoinNews story, Cheerios are Still Bearing Golden Treasures, caught the interest of many readers. It was an article on the 2000-P Sacagawea dollars that were […]

Heritage is going to have a “proof like” PCGS MS68 “Cheerios” dollar at the Baltimore ANA convention!!!

I also have 1 UNOPEN BOX of 2000 Cheerios dollar, I hAVE stopped myself afew times from opening it > you know the temptation. Anyway it has a date on the upper fold, that reads better if used by 21AUG00 with a nuber YY024004 > not sure wht that is … as I say it is a mystery, even thought of getting it XRAYED. Would love to hear any thoughs on this.

I was a lucky winner of 100.00 worth of these coins in the cereal. Anyone know the best place to sell-still in unwrapped rolls. I also have a few of the pennies

I think I have a circulated one. How can I tell? It has 2000 P on the front with a raised center tail feather like in the picture on the back. Where can I sell it?

I would like to know the price range of a sealed Sacagawea dollar from a box of Cheerios. Thank you

I won the 100 coins in my box of cheerios. They came in rolls, and I spent most of them. I have only 4 left. They say 2000 P, but I cannot tell if the tailfeathers are pattern or smoothed. Are these supposed to be the pattern coins or only the 5500 that came singly in the box?

I was looking through a box of old coins and found these 2000 p 4 of them how can I find out if they are from the cheerios box and what they are worth?

I have 7 sacagawea coins from Cheerios .where can I sell them.and what can I get for them.

Are they still in the cherrios package?

My wife has just settled her fathers estate. We found a great amount of silver quarters which we sold to a dealer. We also found what we are pretty sure are Sacagawea Gold coins we believe are Cheerio edition 2000 P year. we have 8 coins uncirculated in outstanding shape. We would like to know who to contact

Does anyone answer these questions? They are very valid and not unlike the questions I too have regarding the 3 coins I have.

If I were you I would send them to NGC to be officially graded. The better the grade the more they’re worth.

So Love these Coins and would love to find a box of Cheerios with a coin unopened ..