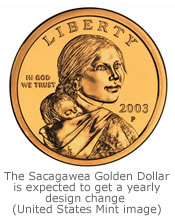 New legislation was approved by Congress this week that’s intended to stir the pot with the Sacagawea golden dollar.

The desire is to create fresh, recurring excitement with the Sacagawea dollar to commemorate Native Americans while also promoting its use in daily circulation.

What’s the plan to make most of this happen? In short, replicate the Presidential $1 Coin series.

The new Sacagawea amendment [H.R. 2358] is named the "Native American $1 Coin Act" and is awaiting the signature of President Bush. If signed (likely), the legislation will amend changes to the Sacagawea $1 series to:

Among the reverse design suggestions in the bill:

(I) the creation of Cherokee written language;

(VI) Ely S. Parker, a general on the staff of General Ulysses S. Grant and later head of the Bureau of Indian Affairs; and

Interestingly, the amendment was set to begin the Sacagawea changes in early 2008. However, passage was too slow so the stipulation in the law dictates the changes will now occur in early 2009.

Since 2005, the United States Mint has produced just over 20 million Sacagawea $1 coins. Will increasing production and making the Sacagawea series more like the new Presidential $1 coins help their acceptance for use in daily circulation?

Almost ONE BILLION $1 coins will be on the street this year. Or, more than three times the total population of everyone here in the U.S. That’s a lot of coins!

But, have you received one of the new Presidential $1 coins for change at your local grocery or convenience store?

If you haven’t, don’t be alarmed. Ask your colleagues, family and friends and most will tell you the same thing – they haven’t either.

Creating a new law for the Sacagawea and designing it after the new Presidential $1 Coin program may have a few flaws!

What will a new Sacagawea $1 series achieve?

“I was glad to introduce this bill. I can think of no better way to pay tribute to the Native American people than to honor their contribution to the development of the United States and her history,” Congressman Kildee said. “The designs on the coin will take the American people through a journey of different experiences of native peoples by exposing them to their unique histories while preserving the memory of Sacagawea.”

However, there’s very little chance these changes will entice consumers to carry Sacagawea’s around in their pockets or purses and actually use them every day.

If the Presidential $1 coins aren’t getting that job accomplished, the new Sacagawea dollars won’t either.

It’s unfortunate but the facts, at least so far, bear out. Until the public is moved to feel a much stronger need to use $1 coins, like removing the $1 paper bill from circulation, any $1 coin will suffer loneliness in daily use.

It would be helpful to have the edge lettering on the $1 coins, it distinguishes the coin from others in a handful of change.

[…] the details on why I think that, you may wish to read the initial CoinNews.net article about the Native American $1 Coin Act as well as the article Facing Facts with Presidential $1 Coins, Their Design & Their […]

I dislike the concept of writing on the edge of coins and is the reason I will not collect Presidential dollars. Last year I received two of them in change and promptly spent them. The idea of having a new design on the reverse of the Sacagawea dollar each year is encouraging, because it means the coin, which I like and collect, will continue to be minted. However, writing on the edge of the new Sacagawea dollar for 2009 and afterward will prompt me to re-evaluate collecting the coin after 2008 and will do little or nothing to increase popularity… Read more »

The act of inscription on the edge is a GREAT idea! I like the idea of the edge being seen as a 3rd face. I won’t be using of collecting the President coins for the simple fact that Pualson caved to protests and changed the edge lettering. What an idiot. He should be jailed for his actions with the $700 billion bailout and this new guy, coming up, Tim Geitner is no better for not paying his taxes for years. I do hope to use the Sacagawea dollar more as th enew designs come out. What about a $2 coin?… Read more »

Why is there not a date on this coin?

Michael, please read the article. The date is on the edge just like the Presidential dollars.