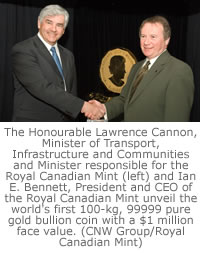 Once again standing out from the crowd, is the Royal Canadian Mint (RCM).

Noted for their innovative and non conservative approach in creating coinage products, the RCM busted a Guinness World Record.

"This recognition is a wonderful endorsement of the incomparable skill and imagination of the people who work at the Royal Canadian Mint. The Mint has long been recognized as one of the most innovative in the world and the Guinness World Record is further evidence of this fact.”

The real value of the Royal Canadian Mint gold coin

The gold coin is spectacular in another sense – how much it’s worth. The $1 million face value is small compared to the real value of the coin’s gold content.

Yesterday, October 18, the gold spot price closed at $764.15 an ounce. Taking the weight of gold coin and pulling out the calculator, that makes the coin worth at least $2,017,000.

And for the record, the RCM has made five of these coins!

Two previous CoinNews.net articles about this world-record coin can be read here: