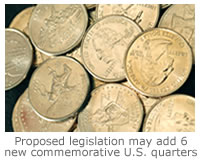 All good things come to an end. The 50 State Quarters® Program is near that end. Or, is it?

Next year all 50 states will have been commemorated and, by law, the state quarters series will close down.

However, there’s legislation that has passed the House and is already in the Senate’s hands to change that.

It would essentially extend the program with 6 more quarters, starting in 2009.

Rep. Eleanor Holmes Norton, D.C. actually introduced the bill back on January 10. It passed through the House on January 23 and was sent to the Senate the following day.

To date, the bill has been read twice and is now referred to the Committee on Banking, Housing, and Urban Affairs.

Although passing certain legislation can take time, this one has dragged on for months. Apparently, it’s not necessary a "done deal".

Numismatic News recently published reader responses on whether the legislation should be passed. Perhaps Senators feel or are hearing mixed messages from their contingents similar to the Numismatic News respondents.

Obviously, this bill brings forth mixed emotions and compelling reasons for both dropping the bill and passing it.