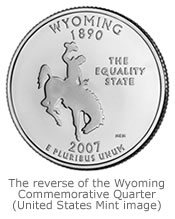 The latest quarter from the 50 State Quarters® Program is now available. The Wyoming commemorative quarters officially bucked out of the U.S. Mint doors just yesterday.

Or, stated without the intended humor, they’ve been moved into daily circulation. If you’re worried you won’t be able to find any, you can also directly purchase the quarters in two-roll sets and bags from the United States Mint.

The Wyoming quarter-dollar is the 44th coin released in the 50 State Quarters Program and fourth for 2007.

The quarter’s reverse image features a bucking horse and rider, which symbolized the States Wild West heritage. Inscribed are the words "Equality State", "Wyoming" and "1890". The latter is the year Wyoming was admitted into the Union (on July 10th, to be exact).

Unlike many other state quarters, the Wyoming design is simplistic. That in itself helps set it apart. Numismatists, who pride themselves on the study of coins and collecting them, have had mixed comments about the new coins.

There are those who love the refreshing simplicity of it while others think the Wyoming quarter is just too plain.

What’s the price of the Wyoming State Quarters?

If you’re interested in purchasing circulating versions of the coins from the U.S. Mint, the price tag (minus shipping and handling) is:

You may be interested in why anyone in their right mind would purchase the coins at a significant premium from the mint when they could simply stop by their local bank and get them at face value.

Answer? Although these coins sold by the United States Mint are the circulating variety that many will shortly see in every day use, because they come straight from the mint they actually haven’t and won’t be in circulation. As such, they’ll be in better shape with less nicks and scratches. That’s attractive to collectors.

Also, buying rolls and bags directly from the mint overcomes the difficulties in actually trying to track them down locally – sometimes a hard task.

The coins will be available for direct purchase from the mint for 10 weeks. You can also now purchase special collectible proof and uncirculated coins from the U.S. Mint that include the Wyoming state quarter.

More news, information and video of the Wyoming quarter

If you remember, CoinNews.net first wrote a small article about the Wyoming state quarter back in early August. Your time probably isn’t well spent re-reading that article but it did contain a link to a video by the Casper Star Tribune.

You can watch some behind the scenes footage of the Wyoming quarter being produced at the Denver Mint and also get a few more details about the quarter itself.

It’s an interesting; short video so you may want to spend some time there!