As an amateur coin collector, I am always pleased to find when my thoughts are in agreement with many numismatists. One such example of this rare occurrence is the Mercury dime. I have always felt that this was just a beautiful piece of art, on a tiny metal “canvas”. It is accepted by many to be the most aesthetically pleasing coin ever produced.

Contrary to popular belief, the design portrayed is not that of the Roman god Mercury, nor does it contain the element mercury. 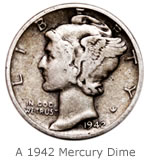 The design is actually of Liberty wearing a cap called a Bonnet Phrygian. This cap symbolizes freedom, a reference to freed roman slaves who wore such caps. How the mislabeling really came about, no one knows for sure, but after many years the name has stuck.

The design was originated by Adolph A. Weinman as part of a competition to replace the Barber dime. The Winged Liberty Head dime, as it is more correctly known, was minted from 1916-1945. On the obverse, of course, is Liberty wearing the Phrygian cap and the words “In God We Trust” and “Liberty”, along with the date. The reverse shows “United States of America”, “E Pluribus Unum” and “One Dime” along with the Roman fasces, symbolizing power and authority.

The Mercury dime contains 90% silver and 10% copper. Also of interest is that the date run was not continuous because no dimes were produced in 1922, 1932, or 1933. Unless one of these dimes is badly damaged or worn, it is worth at least $.60. Some of them, even for an average grade, can fetch over $300. Find yourself a Mercury dime with just small traces of wear and the price can go much higher!

If you have never seen a Mercury dime, or it has been a while, do yourself a favor and go to a coin show or dealer and buy one. I guarantee you will not be disappointed in its beauty!

I have a Silver “Winged” Liberty that has never been in circulation. It is numbered NO.3275 and is carded. Coin composition: .900 Pure Silver, Precious Metal Weight: 2.5 grams, Mintage Released: 1916-1945.
The card is also signed by David Carrington.
I would like to know what the worth of this coin is and where I might be able to sell it at a fair price.

I HAVE TWO SILVER DIMES WINGED ONE IS 1944 AND THE OTHER IS 1942 THE 1942 IS IN MENT CONDITIONSION AND THE OTHER ISNT….. THEY ARE .900 AND Precious Metal Weight: 2.5 grams, Mintage Released: 1916-1945.The card is also signed by David Carrington.
I would like to know what the worth of this coin is and where I might be able to sell it at a fair price.

Is there a Mercury dime minted in 1918? I am intrested in the reverse side picture. What is it a picture of and what does it mean?

This is a news site, so it may not be the best forum for posting valuation questions – try a site like CoinPeople, CoinClub, About, WikiAnswers, and similar, where there are lots of collectors. But anyway, Mercury dimes from the 1940s are generally only worth their silver content unless they’re in top, or mint (please – NOT “ment”) condition. As of this posting that’s about $1.25-$1.50 retail, or around $1 at one of those “we buy gold and silver” places. The only significant exception among Mercs from the 1940s is a 1942/1 overdate coin which sells in the range $500-$1500.… Read more »

I have a Silver “Winged” Liberty that has never been in circulation. It is numbered NO.3275 and is carded. Coin composition: .900 Pure Silver, Precious Metal Weight: 2.5 grams, Mintage Released: 1916-1945.
The card is also signed by David Carrington.
I would like to know what the worth of this coin is and where I might be able to sell it at a fair price.

I have the EXACT SAME COIN, Silver Winged Liberty, with issue No. 3275 with mintage release 1916-1945. Is something funny going here? Were we ripped off?

have a 1942 mercury dime it is turning black but is in good shape should I have it cleaned.
Thank K

I have one of these dimes, no 3275. Seems like there should be only one no. for each coin. S-igned David K. Carrington. Depositary control department vault facilities of lindenwold fine jewelers. Are there a bunch of crooks runnind around loose?Ard.

i have same certificate and number..worth anything

I to have the same certificate number #3275 signed by the same person. Seams like Lindenwold can’t be trusted. I am also curious to know if my #3275 liberty dime is worth anything. Does anyone know or how do we find out?

How much is a silver Lincoln wheat. Penny is worth?