In turning the corner to part two of this short series, we bump into two more confusing coin collector/numismatist terms. I’m talking 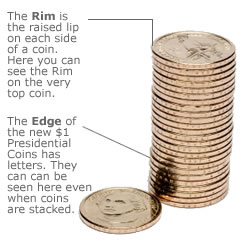 about a coin’s “Rim” and “Edge”. They’re not unfamiliar words to our daily thinking but when used in describing coins they sure can be.

Yet, to be fair, even in some coin references or conversations, it’s not too uncommon to see or hear them unintentionally interchanged. Or, even one used to describe the other. In the coin collecting community, they’re completely independent of each other, describing different parts of a coin. Let’s get down to details…

The Edge is sometimes called the “third side of the coin”. We’ve already talked about the two sides of a coin, its obverse (heads) and reverse (tails). The only possible side left is the space between them, known as the edge!

Most U.S. coins have a reeded edge. That probably helps your thinking. To possibly help more, if you’ve held one of the new Presidential $1 Coins in your hands, you’ve seen letters inscribed on their edge, instead of the traditional reeding.

Now we’re left with the Rim, which is easy given what’s left. The rim of the coin is the raised and very outer portions found both on the coin’s obverse and reverse sides. Easy enough, I hope! If not, the included image highlighting each should help you.

To sum everything up, lets try a quick mental image. If a coin was a car tire, it’s edge would roll and always touch the ground while its rim would never make surface contact. Well… unless you’re in the habit of taking sharp turns and tend to hit curbs…