Casually hearing some coin collecting terms and then later trying to recall them often brings a cloudy haze through a new collector’s mind.

No one is going to chide you by incorrectly identifying parts of a coin using non collector lingo. But, hey, someone may try to correct you nicely and who wants to be even slightly embarrassed? It’s just better using coin collector (numismatist) talk whenever possible to keep conversations between coin hobbyists flowing smoothly. 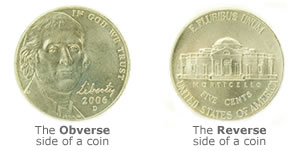 If you’ve ever watched the Super Bowl, there’s always the beginning dramatics and excitement of the referee talking about the coin toss. In football terms, he’ll tell the selected captain to call “heads” or “tails” when he flips the coin in the air. We all understand heads and tails because it’s something we’ve all heard and tried multiple times since very early childhood. It’s natural.

Believe in it… Feel it… Remember it… Good luck!

[…] The $50 coin is set to contain 1 troy ounce of fine gold and limited to only 50,000. Its Obverse would have an image of the sun and the Reverse "shall bear a design emblematic of the […]