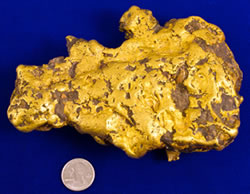 The $460,000 winning bid for a headline-making, 100-ounce gold nugget was made by Spectrum Numismatics International of Irvine, California, a division of Spectrum Group International, at a public auction in Sacramento, California on March 16, 2011.

Nicknamed the "Washington Nugget" because it was discovered last year near Washington, California, it is believed to be the largest, verifiable California gold nugget still in existence. The auction on the eve of the [...]

Bowers and Merena to Merge with Stack’s, Create Stack’s-Bowers Numismatics

Spectrum Group International, Inc. (SPGZ.PK) announced today that its subsidiary Bowers and Merena Auctions, one of the world's pre-eminent auctioneers of rare coins and currency, has entered into an agreement with Stack's, the oldest rare coin retail and auction company in the U.S., to combine their operations.