This offer was originally set to expire on Aug. 15, but it was extended five days.

Based on U.S. Mint weekly sales reports, the offer has enjoyed some success since it was introduced on Aug. 1. The three weekly reports before the promo began showed gains for the 1-ounce gold coin of 158; 74; and 48. The two reports since the promo’s start have the gold coin increasing by 1,004 and 595.

The body of a Mint email to customers about the promotion follows.

To get this offer, you must order at the link below.

There is no household limit on this special offer, but inventory is depleting. Don’t miss out! Offer expires on August 20!

Nice offer but have to pass.

Me too. The last time I bought gold from the Mint was when the Gold Buffalo was introduced. It was a great price I couldn’t pass up. The next year the price went up and I haven’t bought U.S. Mint gold since. Have bought British half sovereigns and sovereigns and Chinese gold Pandas instead.

I would say, Antonio, getting that one as your last gold from the US Mint was a really smart choice; what an amazingly beautiful coin!

Yes, it is. Another smart choice was buying the 1995 anniversary AGE set with the 1995 W ASE. One of the best purchases I made.

OMG, Antonio, you are the exceedingly fortunate owner of a 1995-W ASE Proof! It takes a lot to make me jealous, but you just more than made the cut. What a fabulous coup it was for you to acquire that coin! 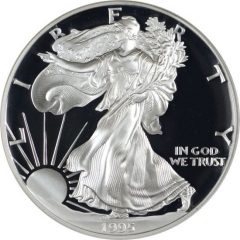 That’s some pretty fancy coinage you have there, Antonio. My collection is far more modern, common and modest, but then, I’ve never been one to ask for much in general.

I wanted to get that 4 gold coin set with the W ASE when it was offered ‘95. Couldn’t pull the trigger due to family issues. I had to pay a lot more for the set about 15 years ago. Love the ‘95 set and even though I paid a lot more for it, I am glad I saved up for it.

I have a feeling, East Coast Guru, that even with the higher purchase price in the long run you are still ahead, at least I certainly hope so. In any case, you have yourself a beauty of a Set there.

I pass on all gold, Rooster. It’s just too pricey, meaning I can add lots of silver coins to my collection for the cost of a single gold one.

Hopefully Mike Unser will take notice of your observation and subsequent correction and proceed to make the required change in the article above.

Why do ads continue to promote Trump “coins”?

You didn’t by any chance mean to hit the Z key rather than the G.

There are likely several answers to that question, Antonio, and just as likely very few that will not ignite another war of the comments. I plead at least the Fifth…and maybe more.

I already have both. I got them graded by PCGS and got 70DCAM on both. But I got mine for way cheaper than with this offer

Luck has been with you, Adam. Congrats on all counts!

Thanks Kaiser. I just submitted the 2015 Liberty 1oz Gold at the world fair of Money last week. I submitted the 2021 Liberty Gold but that one graded 69DCAM. So far just the 2019 Liberty gold 1oz and the 2 2017 have graded 70. I submitted 3 of the 2022 silver Liberty at the Show. And I ordered 2 online. Thinking about going to the Long Beach coin expo next month.

You’re most welcome, Adam L, and good for you on all those top flight gradings. Those are stellar additions to your obviously splendid collection;
it definitely sounds like you are building quite a sizable gold showcase there!

By the way, and while I am aware this will not hold water numismatically speaking, I do believe a bit too much is made about the difference between a 69 grade and a 70 grade. Realistically speaking there is no objective way to guarantee a coin to be without any defect whatsoever, and additionally, the non-enhanced visual perception of the difference between many a 69 and a 70 are likely apparent only to the extremely select few.