Precious metals gained for a second straight session Wednesday, led by palladium. Gold’s climb was the lowest, but the yellow metal still ended the day at a more than 13.5-month high.

"Risk aversion is still elevated at mid-week, and that’s also supportive for the safe-haven metals markets," Jim Wyckoff, a senior analyst at Kitco Inc, said in a daily research note.

"On the front burner of the marketplace remains the Russian incursion into Ukraine. The U.S. and other nations have slapped sanctions on Russia, but it appears the West has no intention of military action against Russia. That has somewhat assuaged the marketplace, for now," Wyckoff said.

And add to that the terrible twin, inflation fear.

Kaiser and Rich, I’m interested in your thoughts on the Purple Heart pre-orders starting tomorrow (Thur 2-24) at noon? Based on sales of NLB to date, I don’t expect to see any one day sell outs given the amounts the Mint has on hand. It’s backwards to me that the price of the 3-coin proof set is more than the sum total of the three coins individually. Do you see any numismatic value worth paying 147% over spot for the gold coin, and 350% over spot for the silver? I’m planning on sitting this out and may sit out the… Read more »

Rich, thanks for your reply and thoughts on this!

Kaiser, thank you for your insight! I refrained from buying the NLB 3-coin set, which shares the same price and product limit as the 3-coin PH. As of Feb 20, the NLB 3-coin set had 3,185 sold- and 1,788 available as of Feb 23. I’m going to refrain from going in on any PH coins tomorrow- as I think they’ll be available for several months if not until the end of the year. I’m interested to see how the 1st week sales of PH compare with NLB– if they start to look like sell-outs I might change my tune.

“13.5 months” That’s almost like when they say “That’s the most it moved since yesterday”

I’m glad I purchased my gold coins last year. It’ll be interesting to see what the Mint will charge for the gold coins this year. They aren’t listing any prices yet, but I’m guessing it’ll be more, more, more!

Kaiser, You didn’t have to spell Larry with 3 r’s, as I mistakenly did. I’m not a war hawk and have been opposed to all of these senseless conflicts we’ve stuck our noses into. What was the point of the Afghan conflict? We spent trillions of dollars, lost a lot of blood, and left $90 billion worth of weaponry behind for our foes. Currently, we are $30 trillion plus in debt and borrow from our real threat…China. We haven’t won a conflict since WW2. So yeah, I’d call us a paper tiger. I’m not big on gambling, but I’d bet… Read more »

Sir Kaiser, while we are quoting Zappa… 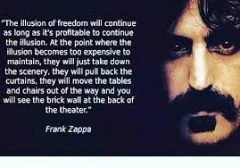 Tomorrow when the markets open you’re going to hear a giant sucking sound.

Crypto trades 24/7 Doge .11 cents BitCon near $30k The HODL’s and Stonkers are toast 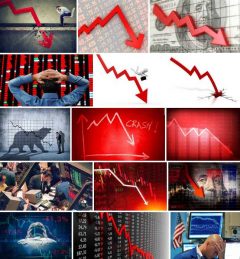 Here comes the PPT to the rescue