When the hammer falls for the final time in Heritage Auctions’ US Coins Signature® Auction November 11-14, a number of seldom-seen rarities, many from long-held private collections, will have found new homes.

"We are very excited to offer such a wonderful array of scarce and rare pieces from passionate collectors," Heritage Auctions Senior Vice President Sarah Miller said. "From Carson Cities to early US type to patterns, there is truly something for everyone in the November Auction."

The Prestwick Collection of Carson City coins reflects the owner’s appreciation of both Scotland’s Prestwick Golf Club, with its legendary place in the annals of golf, and the legacy of Carson City coinage within the numismatic field. Viewed by many as the "true home" of the British open, the venue served as host to the first 12 Opens, starting in 1860, as well as another 12 Opens over ensuing years. The Carson City Mint’s coinage spanned much of the same era and was a microcosm of the Old West numismatic times until it, too, was succeeded by other venues.

The Prestwick Collection includes 61 lots of Carson City coins, including several classic Western rarities in particularly high grades. The consignor of these coins has played several times at Prestwick and has greatly enjoyed his time collecting distinguished coins from the legendary Nevada Mint, including but not limited to:

The Pacific Rim Collection is made up entirely of impressive U.S. patterns, 31 of which will be offered in the Premier Session, with 16 more in the afternoon floor session.

Among the extraordinary patterns in the collection are an 1870 Indian Princess dollar struck in silver, which joins an 1879 Morgan dollar in copper and an 1880 Goloid Metric dollar among highlights among Premier Session Patterns.

The auction will feature a selection of early type coins from Charles Link, a longtime Heritage Auctions client with an exceptional eye for quality and scarce varieties; among his specialties are Flowing Hair, Draped Bust and Capped Bust halves. Overton specialists will want to investigate several outstanding half dollars, including an exceptional 1809 O-107 half dollar certified MS65 PCGS, which tops the Condition Census for the variety and dazzles the eye with its fantastic Gem surface quality.

The coin is essentially prooflike beneath a speckling of original reddish-tan toning. A handful of other denominations offer equally impressive selections from this high-quality collection.

Other highlights from the Charles Link Collection include, but are not limited to:

This collection’s origin was the in the curiosity of the consignor, who discovered coins in his pocket that he found fascinating when he was in his early teens. That initial interest blossomed when he discovered a local coin shop, where he found mesmerizing copper pieces. As his interest grew, he zeroed in on scarcer certified coins.

He then decided to widen the scope of his collection when he concluded it made sense to own a wider selection of American coins rather than simply a few top rarities. He collected by denomination, type and mint to reflect different periods in American history; in so doing, he assembled a trove that now includes key issues, rare varieties, patterns and better-date copper, silver and gold. Selections from the N.E. Lincoln Collection can be found in the regular Floor Session and the online Internet Signature® Session of this auction; highlights from the collection include, but are not limited to:

Is envy a sin? I sure do wish the Mint had chose to use one of those retro Eagles for the new ASE. Those are indeed amazing coins. It’ll be interesting to see how many Unobtanium coins it’ll take to purchase them!

Larry T, the reverse of that copper 1879 Morgan would have a nice reverse design for the Type 2 ASE.

I have a 1861 O Seated Liberty Half Dollar(from the SS Republic), the same as the 1809 50 C pictured above, and it is mesmerizing
to me. I don’t think I’d ever get tired of seeing it on a new ASE.

Larry T., that coin is a Beauty!
True story: A few years back I bought a small lot of old US Silver coins and there was an 1854 Seated Liberty Half in the lot. But it had a hole in the top! To make a ‘rotten apple into applesauce,’ I put a ring through the hole, then hung the half dollar on a silver chain. Gave it to my sister, who was born in 1954, as a unique Christmas gift. She still loves wearing it! 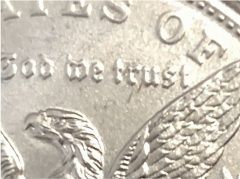 The 2021 Morgans are not faring as well in the secondary market of Feebay No takers at $185.00 when just weeks ago some were selling over the $600 point. 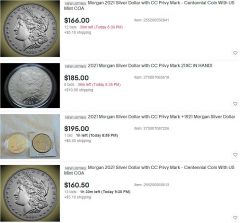 Kaiser, you are right, with the feedback everyone was providing it has been a cluster-cluck! The Mint made it a nightmare for them and those who could not anticipate the difficulties it would cause to purchase all 6 coins on 3 different dates as a set. Now after the preorder time has lapse ,the shipping and receiving has begun, we see there is an over abundance of each coin being offered for a secondary sale. It would of been much better if the Mint offered the Morgan’s and Peace dollars as a set of 6 in a nice presentation box… Read more »

Yes, that would have been ideal, but nice presentation boxes are probably a thing of the past.

These are going as low as $159 each “raw” from a dealer company in Phoenix not on Ebay ®™ . (Phoenix is near the 5th level of Hell for those on a tour of the “Hottest” vacation spots!). Lol.

Got my Peace dollars today – the good old Mint had some fun with me – the capsules had fingerprint smudges and some kind of residue and initially the coins looked awful but after cleaning the capsules – the coins were Beautiful.

As I look at this cheapened packaging and the lid covers with the same color ink for the mint logo (so it can’t be seen) and the ugly silver foil portrayal of the of the obverse it just makes me want to: https://www.youtube.com/watch?v=MG7KCOO76Wc