Large military silver medals are the topic of the day as the United States Mint releases at noon ET its U.S. Coast Guard 2.5 Ounce Silver Medal.

Limited to 10,000 pieces, each has a diameter of 2 inches and is struck from 99.9% pure silver. Featured designs on the medal honor the United States Coast Guard.

"Since 1790, the Coast Guard has safeguarded the American people and promoted national security, border security, and economic prosperity in a complex and evolving maritime environment," explains the U.S. Coast Guard website. "The Coast Guard saves those in peril and protects the Nation from all maritime threats."

This product is the second one from the U.S. Mint’s Armed Forces Silver Medal Program. The first honored the U.S. Air Force and launched on July 13. It sold out.

Eighteen candidate designs for the Coast Guard medal were unveiled in 2018. The Citizens Coinage Advisory Committee (CCAC) and the Commission of Fine Arts (CFA) recommended two of the designs. These were selected by the Treasury Secretary.

"U.S. COAST GUARD" and the Coast Guard motto "SEMPER PARATUS" (always ready) is inscribed above the cutter. The inscribed "753" hull number identifies the cutter Hamilton, named for Alexander Hamilton who was instrumental in the creation of the service.

Designed by Thomas Hipschen and sculpted by Renata Gordon, two iconic symbols of the Coast Guard are presented on the reverse (tails side) of the medal, a life preserver ring and racing stripe mark.

The preserver contains the Coast Guard’s core values "HONOR," "RESPECT," and "DEVOTION TO DUTY." The Coast Guard emblem is shown in the center of the design.

Priced at $160, the product may be purchased directly from the U.S. Mint via their online store for silver medals.

Orders are limited to one per household for the first 24 hours.

I’m a little disappointed the first medal was the airforce. I was hoping to see 640 Afghani’s crammed into a C17 on the reverse 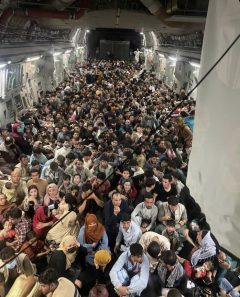 And here I’m stressed about getting that da*n two-piece reverse set on the 24th. I hope that everyone that manages to get out finds peace and safety wherever they end up, especially the families.

Get ready for more stress. The on sale date just got changed to September 13th.

Thanks for the heads up RAV. Just confirmed on the US Mint site:
American Eagle 2021 One Ounce Silver Reverse Proof Two-Coin Set Designer EditionThis product will be available for sale on September 13, 2021, at 12 noon (ET). Has the mint announced the reason for the release date change?

Having been to Afghanistan twice, I find it difficult to politely express my disappointment in how this administration dropped the ball and allowed this disaster to occur. And I made it out of there alive…imagine how the families of those Americans who lost their lives over there are feeling right now. Our fellow Americans died in Afghanistan – For What? In a Kabul bazaar, I fished a Jefferson Nickel out of a bin of coins. When I asked the vendor how much he wanted for it, he offered a ridiculously exorbitant price; I had to turn my head away and… Read more »

Thank-You For Your ServIce

I like this medal, with its ship cutting through the waves. If I was in trouble on the high sea, how comforting that view would be, and if pirates and smugglers were sighted and being pursued, may that image remind them that it’s going to be a bad day and surrender or destruction are the only options. God Bless and Protect the United States Coast Guard, proudly serving the nation since August 4, 1790. But with that said, and with my full support to this brave branch of military service, I’m not going to buy this medal. I focus on… Read more »

I also like the comic caption, but please tell me…is there a source for the values of medals?
Something like a Redbook for medals?

I was really looking forward to the Navy medal until I saw this. The Coast Guard medal is a great design, which means the Navy one will probably disappoint me.

Well, it took me 40 seconds to check out, rather than the 28 minutes to get a Peace Dollar.

One and done in less than a minute.

Same here – about one minute. One can always hope it will be so easy for next week’s reverse ASE set. Sighhhh, the eternal optimist…

No kidding. Can only hope.

Also, the Liberty Gold ounce coin goes on sale in 30 hours time, and they haven’t even put a price up yet.
I understand Gold is volatile, but at some point you’ve got to set a stake in the ground.

Maybe the US Mint is delaying the sale to add more servers/bandwidth to improve the checkout step (have it in the cart but unable to checkout despite repeated attempts)??

Did you see how many pre-sales Ebay already has for the Liberty coin? I am afraid the flippers saw the low mintage level and are making a play to grab many of the coins. It looks similar to the 1/10 ounce two coin set with low mintage and many Ebay pre-sales (set sold out in 2 minutes).

Not all ‘flippers’ got their hands on that 1/10th oz AGE Designer Set. I was able to obtain one (miracles never cease to amaze me) and it is not for sale! But I know what you’re saying, these days I feel like I’m running a 100M race and my competition is Usain Bolt every time the Mint releases a desirable coin!

Got this coin just now.
I have a question though.
I see “American Buffalo 2021 One Ounce Gold Proof Coin” for $2690 on US Mint website. But I see it listed for as low as $1881 on other websites. Same 2021 year and 1 oz bars.
Which one is better to purchase? Why is US Mint priced much higher? The other websites are offering certification too.

Thank you in advance.

I have another question on this topic. Why is that the British Royal Mint can sell bullion and proof collector coins but the US mint does not directly from the website?

Whatever the reason I am grateful for it. Can you imagine if they tried to sell both numismatic and bullion coins?? They have enough trouble with the numismatic ones…

A better question is why are these “mint state” ASEs which are slabbed as ‘first strike” or “emergency production” being sold as collectible coins with a high premium, when in fact they are bullion coins minted in the millions for investment purposes. These coins come in tubes of 20 in a “monster” box of 1000 coins. PLEASE do not buy these coins as slabbed collectibles (who cares what the grade is for a bullion coin???). I really wish that PCGS and NGC would NOT grade these coins – they are really just legal tender ’rounds’. Make sure to only buy… Read more »

For the past 6 years, at the beginning of each year (except this one), I would buy a roll of 20 and pull out what I deemed the nicest and most appealing for my yearly set. The rest are in a safety deposit box.

Worked out to about $10/12 over spot. I will never buy a certified one. Ever

There are only 500 ASE’s per Green monster Box, not 1000. Twenty five tubes each containing twenty coins. If you bought one with 1000 coins in it, you have a rarity. I’d get in touch with M.Mezach ASAP! I agree with the rest of your post.

The ‘Mutant Monster Box’! All I can say is I’m LMAO!

Exactly right. The proof versions do have a better surface finish, but actually I mostly buy the investment ones but from a reputable dealer! Not a ebay flipper! He / she will take the same coin and have it graded (!!?) and try to sell it like a proof / limited mintage collectible. Sad… it’s a BIG issue with the ASEs right now.

I’m with you completely on both points. And we sure have had “fun” with the mint’s ordering process haven’t we. Especially the past year or so.

Fun? Only if you are masochistic.

Unfortunately, because I’ll be out of town on business, I won’t get to have “fun” on Sept 13th trying to get the 2 coin reverse proof ASE set.

I was so looking forward to the 24th.

Well Sir Kaiser, 8 hours since the launch time for the Coast Guard Medal and it is still available and not sold out even with it’s very attractive design, unlike the Air Force Medal’s cheesy design (obverse and reverse). With the mintage limit of 10,000 and nice design, I figured the Coast Guard Medal would have been unavailable by now, even with the household order limit of 1.

I kid, not poking fun

My Samsung is my lifeline. Don’t own a tablet or a pc. But, I’ve secured most of the must haves from the mint on this thing.

I don’t go outta my way to avoid progress as you kinda project. Total apologies if I misinterpreted that.

However….. I’m prob one of the few searching for a honking v8 in the increasingly electric landscape.

No DVR? Next you’re going to tell us you don’t use any A/C (in your car or home!) Anyone that wants to take my DVR better come armed to the teeth! Same for my iPhone and new iMac. God, I hope our electric grid never goes down!

Has anyone on here who had an enrollment for the proof S silver eagles seen any movement on your order?

Sherril, I received my proof S silver eagle from enrollment yesterday. The two additional coins I ordered via the defacto lottery on the mint site are on backorder.

Sherril, I received my (S) enrollments on Monday. Guess there were no holdups getting the shipment to the west coast. Way to go USPS!

Sorry to those still waiting.

I received my 2021 S SAE’s yesterday. They shipped them on the same day they were released.I love the enrollment program.

I had the same thing happen with my AGE Designer Set. It took about 5 days before the ‘shipping history’ showed any movement on my tracking page. Once it did, it moved quickly to my waiting hands! I would just relax, unless you enjoy dealing with ‘clueless’ government employees?

Glad yours are on the way finally.

I can’t believe this 2.5 oz. silver medal did not sellout in an hour with the lowest mintage 10,000 of any modern commemorative to date plus the best looking. Oh well i guess beauty is in the eye of the beholder & cheaper then the ASE’s

Medals are a hard sell, even at low mintage. Not nearly as much interest as an actual coin.

Exactly. It amazes these are still available.

Kaiser: That’s true. Just medals. Many are not interested in or not aware of them. I pick up the ones I like. That mintage though. The 2016 medals sold out fast with a 12,500 mintage. They were priced at $34.95 each which made it attractive.

Absolutely. The pricing of old seemed appropriate and fair.

Surprised it took this long. At least whoever wanted one had a chance. Thanks Gary!

FYI. For some reason, the US Mint site allows you to purchase the USAF medal – probably the few left over or returned.

Also, they added a space force medal to this series!!! 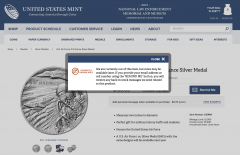 The picture say it all 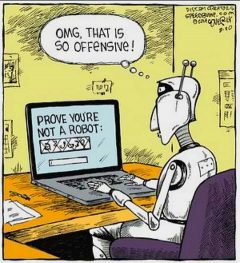