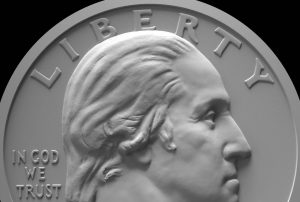 The United States Mint has announced all five women to be celebrated during the first year of their American Women Quarters™ Program.

Authorized under Public Law 116-330, the program of quarter dollars will feature reverses (tails side) that honor women who shaped American history. There will be up to five different reverses every year beginning in 2022 and continuing through 2025.

"Courageous women have made countless contributions throughout our great Nation’s history," said Mint Director David J. Ryder. "The American Women Quarters Program is a unique opportunity to honor a broad and diverse group of women whose achievements, triumphs, and legacies reflect the strength and resilience of our Nation. We look forward to sharing their stories."

In April, the U.S. Mint announced the first two honorees. This week the bureau announced the other three women to be celebrated in 2022. The first five honorees are:

The government agency has also unveiled proposed designs for the obverse (heads side) of 2022-2025 American Women quarter dollars. One obverse image will be shared across all four years of quarters and it must feature a likeness of George Washington that is distinguishable from past quarter programs.

As required by Public Law 116-330, no living person can be featured on the coin designs. The public is invited to submit recommendations for women to be honored using the web portal established by the National Women’s History Museum.

The Treasury Secretary is tasked with selecting the final quarter dollar designs after consultation with the Smithsonian Institution’s American Women’s History Initiative, the National Women’s History Museum, and the Congressional Bipartisan Women’s Caucus and following recommendations by Citizens Coinage Advisory Committee and Commission of Fine Arts.

Kaiser Wilhelm needs to get a life

Quality caviar is pleasantly briney with a silky texture and imparts a mild sea wind fragrance.

Roe that’s bitter with sour notes, burlap texture and the odor of mildew doesn’t even rise to the level of Indiana lumpfish.

Keep in mind, fish rot from the head.

I thought we were posting comments about coins – not “WOKE” opinions.. These pictures are not needed. Please stay on subject.

Why so much emphasis on the first this or that.

The number one version of a Washington front for the quarter should DEFINITELY be chosen. I trust Yellen will do so.

Nancy Pelosi for the new quarter obverse??
If you want to see Texas (and other states) actually secede from the nation, that would probably do it…

When can we celebrate the pain and suffering of the coin collector’s who have been victimized by the US Mint and it’s Dealers and Graders?

And yet – they forgot those women who have made the most significant contributions such as the creator’s of the Women’s Shit Throwing Festival.