U.S. currency production in 2019 is expected to reach just over 7 billion notes valued at more than $206.9 billion, based on a Federal Reserve order submitted to the Bureau of Engraving and Printing (BEP).

The figures come from a print order submitted by the Board of Governors of the Federal Reserve, the issuing authority for U.S. banknotes. It reflects the board’s estimate of net demand for currency in FY 2019 from both domestic and international customers.

Based on the latest estimates, about 90% of the notes will be replacements for bills taken out of circulation because their condition no longer meets the criteria for recirculation or because they are of older designs. Replacement estimates totaled 75% in FY 2018; 71% in FY 2017; and 70% in FY 2016.

"The Board’s FY 2019 order of 7.0 billion notes represents a decrease of nearly 0.4 billion notes, or 5 percent, from the FY 2018 order, but is relatively unchanged from the average order the Board placed with the BEP between FY 2014 and FY 2018," the Feb Board said in its latest order statement.

In reality, fewer notes were destroyed in 2018 than estimated, leaving Federal Reserve Banks with more inventory for 2019 than anticipated.

The BEP’s cost of making money varies by banknote. For example, government figures for 2018 show production costs per note at:

Annual orders of $2s had been missing in the last two years because their production numbers surged to 179.2 million in 2016 from 32 million in 2015. In 2017 and 2018, the board estimated that existing inventories of $2s would "meet demand for multiple years."

The following table shows how the Fed’s latest order breaks down by denomination, number of notes and dollar value:

The BEP operates on a fiscal year that begins on Oct. 1 and ends on Sept. 30. They agency produces all U.S. banknotes, and the order for 2019 includes currency set aside for numismatic products.

For reference, this table shows the banknote order totals placed for fiscal year 2018: 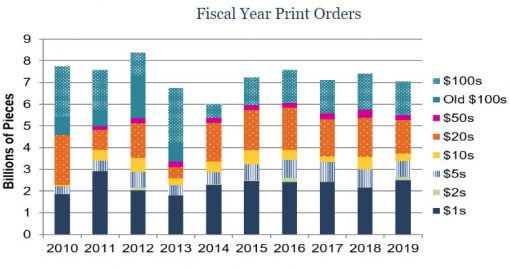 The Bureau of Engraving and Printing produces banknotes at facilities in Fort Worth, TX and Washington, D.C. According to government data, there was approximately $1.69 trillion in circulation as of Sept. 26, 2018, of which $1.64 trillion was in Federal Reserve notes.

as a matter of fact,i’ll take it all so i can buy some things i’ll never be able to afford otherwise and no, i’m not a robot .