Banknotes or Currency Articles US Banknote Production Slows in May 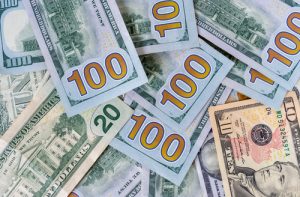 American money production slowed in May for the first time in five months, data from the agency that prints U.S. currency shows.

More than 605.4 million in banknotes were produced last month for a value topping $12.7 billion, according to Bureau of Engraving and Printing (BEP) figures published on Tuesday, June 7. In contrast, April levels logged in at 624 million notes worth over $15.7 billion.

In percentage comparisons from the previous month, the BEP made 3% fewer banknotes and their combined value was 19.3% lower. In other monthly differences, there were:

The number of $5s and $10s matched in both months. Presses printed $2s for the first time in four months.

The BEP printed 640,000 in $100 star notes. Star notes are replacements for misprinted or damaged notes and for certain serial numbers like 000 000 000. They have serial numbers that end with a star “*” designation, and are also so indicated by quantities in the images above. Money collectors usually find star notes more desirable since they can be harder to find.

As an aside and according to data from the Federal Reserve, there was approximately $1.45 trillion in circulation as of April 6, 2016, of which $1.4 trillion was in Federal Reserve notes.

Where do all of those $2 FRNs wind up? Lol. It has been 40 years since the current $2 design was issued on April 13, 1976. I stood in line with my father at his military credit union to get 50 of them & then at the post office to buy the 50 states stamps to lick & put on each of them & get them postmarked on first day of issue. I worked hard that day! & he swears I get them when he is gone. I will frame them in double-sided glass frame for display.

I saw a lot of $2 note issued. But can not get any new one
from the banks. I wonder why?.

Ditto here, I have a lot of trouble getting them from local banks too. One thought is that even though current production is up, it’s not yet at “saturation”. The few twos I’ve picked up and spent were immediately pulled from circulation by cashiers who treat them as keepsakes, and/or who are convinced they’re rare. I don’t understand why $2 bills are conspicuously absent from almost every discussion about ending $1 bill production. My take would be to redesign the two and crank up printing to say 1/3 the current level of $1 bill production while simultaneously getting rid of… Read more »

I agree that the $2 FRN should be the workhorse of the banknotes issued if they would just stop printing the low value $1 notes. I honestly think most Americans don’t realize the $2 notes are still being printed.

Seth – Thanks much for the thumbs-up. And yes, I get a couple of questions a month along the lines of “why were $2 bills discontinued?” or “when were they withdrawn?” I’m basing my ideas for our Two on Canada’s experiences with the Loonie and Toonie. Their government set a cutover date and stuck to it despite a lot of early grumbling. Admittedly losing the Voyageur dies gave the new denomination loads of extra publicity, but once the coins were readily available most negativity disappeared. As for the Twoonie, I can only speak about what I saw while visiting Toronto… Read more »

Munzen – You sure are right. Canada did it right in all ways with their coinage & banknotes, including getting rid of their 1-cent coin in 2012 & are now reaping the savings benefits. I wish our Congress would notice & act, but the special interest lobby (zinc & paper) is too entrenched in Washington! I lived a 3-hour drive from Windsor, Ontario for three years after college & loved crossing that international bridge once a month into a different world for shopping & some of the best Asian food outside of Asia! And Tim Horton’s had some great coffee… Read more »

As for eliminating the $1 bill and letting the $2 bill finally get its day, I’ve proposed, since no one in Congress wants to propose eliminating Washington from our currency line-up (never mind that he’s on the quarter…a complement of this argument exists when discussing eliminating the cent), that the $2 bill be redesigned with the large off-center portraits used since the 1996 series, but replace Jefferson with Washington. And since that would likely bring out the Jefferson lobby, I additional propose the reverse of this redesigned $2 bill replace the Declaration of Independence signing vignette with that of Mount… Read more »

Vachon – That’s one heck of a good idea! It’s a shame every single design and denomination seems to have acquired lobbies that fight tooth & nail for the status quo, There’s so many other options that would make our money better but they go to DC to die. Seth – I agree with you completely about getting a different perspective from travel. I’m a 100% born and bred American but that doesn’t make me feel we’ve got any monopoly on good ideas. We all need to learn from each other! FWIW I’ve heard rumors Canada is looking how difficult… Read more »