The U.S. Mint on Tuesday, Feb. 16, will introduce its final proof set of Presidential $1 Coins. One of the set’s three dollars features Ronald Reagan, the 40th President of the United States Mint. This article presents photos of a proof Reagan $1 and some of the dies used in striking them.

Made for collectors, proof coins showcase frosted designs against mirror-like backgrounds. Coins in the Mint’s annual proof sets are struck and packaged at the U.S. Mint in San Francisco. We stopped by the facility and were fortunate in getting to see and photograph many of this year’s proofs.

Appearing on the obverse (heads side) of the Ronald Reagan Presidential $1 Coin is a forward facing portrait of the president. The effigy, designed by Richard Masters and sculpted by Joseph Menna, is surrounded by inscriptions of RONALD REAGAN, IN GOD WE TRUST, 40th PRESIDENT and 1981-1989. Here are three photographs of a proof Reagan dollar: 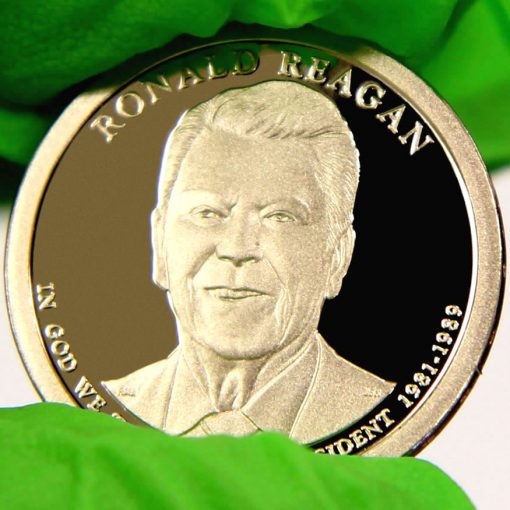 Reverses off all Presidential $1 Coins share Don Everhart’s rendition of the Statue of Liberty and include inscriptions of $1 and UNITED STATES OF AMERICA. The dollars also have common edge letterings of E PLURIBUS UNUM, the year of issue and their mint mark.

To strike the coins, the U.S. Mint uses hardened dies. These are produced at the Philadelphia Mint and then shipped to San Francisco where they’re treated and polished to create their unique finish. A couple photos of a Reagan die appear below. 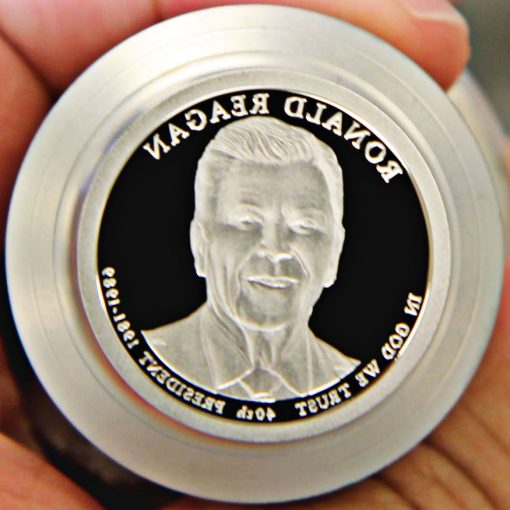 The Presidential $1 Coin Program launched in 2007 and pays tribute to deceased, former commander-in-chiefs in the order in which they served. The program ends this year with the final three coins commemorating Richard M. Nixon, Gerald R. Ford and Ronald Reagan. (See Nixon $1 photos and Ford $1 photos.) Here is a U.S. Mint image of the three dollars inside a proof set’s protective lens:

The 2016 Presidential $1 Coin Proof Set becomes available on Tuesday at noon ET for $17.95. In addition to proof editions, the United States Mint also strikes circulating quality versions for collectors. Nixon $1 coin in rolls, bags and boxes launched on Wednesday, Feb. 3. Their prices range from $32.95 for 25-coin rolls to $275.95 for 250-coin boxes. Circulating quality dollars for Gerald Ford are due out Mar. 8 while those for Reagan are expected to launch sometime in July.

Mike Unser – Thanks for the nice, high quality Reagan Proof $1coin & die photos! You have one typo calling President Reagan the “40th President of the United States Mint.” I guess like most of us you have the Mint on your mind a lot. As I commented about 2 weeks ago on the CoinNews article about the upcoming unveiling of the designs on February 6 at Reagan’s 105th Birthday celebration, the U.S. Mint published the actual Proof $1 Reagan coin photos by major mistake on the U.S. Mint’s website on January 20 briefly in their 3-coin lens before Coin… Read more »

Toothy, Bucky Reagan on the coin, looks like a friggin mess. The WORST…surprised Nancy did not Just say NO to the so called deesign

This coin blog website article from February 15 still has President Ronald Wilson Reagan with a new title as “40th President of the United States Mint”! A new legacy! The Proof version sure does highlight his teeth a lot. But Her Majesty Nancy Reagan picked it & with minor changes approved it. If you don’t like it, you can contact her since she is still with us last I checked!