One of the U.S. dollars for 2016 honors American Indians who used their native language to send coded messages in the First and Second World Wars. This article presents photos of that dollar, the 2016 Native American $1 Coin.

Dollar coins are no longer produced for general circulation but the United States Mint continues to strike them for coin collectors. The bureau makes them in multiple qualities that include circulating and uncirculated from facilities in Denver and Philadelphia and in proof from San Francisco. During a recent visit to the San Francisco Mint, we were fortunate to watch and photograph 2016-dated proof coins produced and packaged for collector sets.

Native American dollars share the obverse design of Glenna Goodacre’s depiction of Sacagawea and her baby. Reverse designs change annually, and celebrate the important contributions made by Indian tribes and individual Native Americans to the history and development of the United States. The winning 2016 $1 design was selected from among 18 candidates emblematic of wartime code talkers.

Created by Thomas D. Rogers, Sr., the reverse features two helmets with inscriptions WWI and WWII, and two feathers that form a V, symbolizing victory, unity, and the importance of the code talkers program.

Proof coins have frosted designs and mirror-like backgrounds, resulting in a cameo-like appearance that coin collectors find appealing. Here are some more photos of a 2016-S Proof Native American $1 Coin. 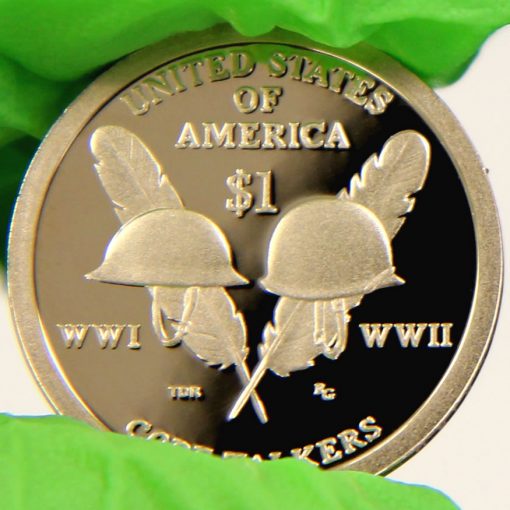 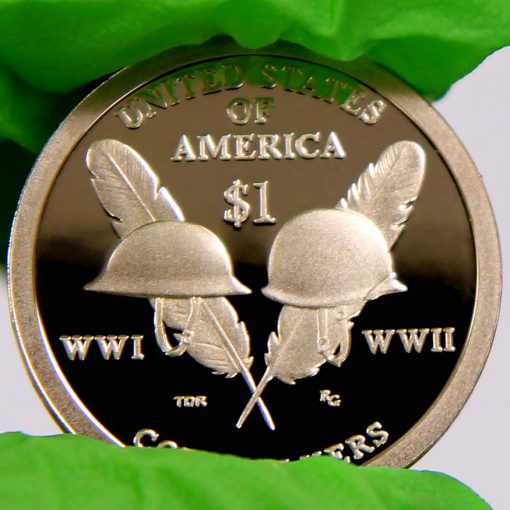 2016-S Proof Native American $1 Coins will be available in several annual sets, including the 2016 Proof Set and the 2016 Silver Proof Set. The former is scheduled for release on Feb. 29 with the latter yet to be determined.

Circulating quality dollars will launch in rolls, bags and boxes on Jan. 27, 2016.

Look for the uncirculated edition in the 2016 Mint Set and the 2016 Annual Uncirculated Dollar Coin Set. Release dates for these products are also yet to be determined.

Nice design. Thanks for the photos, Mike.

Now this is a design I will add to my moderns collection.Merry Christmas.

Simple but nice design. Can’t wait for the C&C version to come out.

Kudos to the U.S. Mint on this great coin design. It will make a nice addition to my U.S. Mint code talkers medals collection. Like Tinto said, i can’t wait for the 2016 American $1 Coin & Currency Set to be offered!

Very glad to see this coin celebrating such an important contribution to American history. Hoping this wonderful tribute will make people more aware of the Code Talkers and what they did for us. Even though it seems the most politically correct design was the winner – not portraying actual soldiers – it is a beautiful memorial.

The Dollar coin in the Coins and Currency set makes it look like the mint took an easy way out: the obverse has the same enhanced uncirculated version of Sacagewea and her son as in past few years while the reverse image looks like it is the same as the current Proof version where previous reverses in the native American C&C sets had more of a reverse proof vibe. I really think the mint missed the mark on the reverse design.’enhancing’.