The dollar appears as part of the Presidential $1 Coin series which debuted in 2007 and has paid tribute to deceased and former commander in chiefs in the order in which they served. This program ends next year with three new coins — the first for Nixon and last two for Gerald R. Ford and Ronald Reagan.

We recently stopped by the U.S. Mint’s facility in San Francisco where proof versions of coins are made for collectors. These editions showcase frosted designs and mirror-like backgrounds. We were fortunate in getting to see and photograph proof Nixon dollars and the dies used to strike them. Here are some photos of the proof dollar: 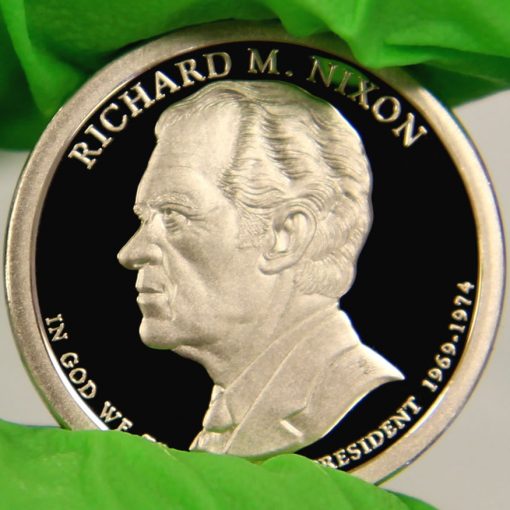 The U.S. Mint only recently announced design details of the Nixon Presidential $1 Coin. United States Mint Sculptor-Engraver Don Everhart created the portrait found on the coin’s obverse or heads side. Inscriptions around the effigy include RICHARD M. NIXON, 37TH PRESIDENT, 1969-1974 and IN GOD WE TRUST.

Reverses off all Presidential dollars share Everhart’s rendition of the Statue of Liberty. Surrounding it are the inscriptions of $1 and UNITED STATES OF AMERICA. Edge inscriptions read E PLURIBUS UNUM, 2016 and a mint mark.

To strike the coins, the U.S. Mint uses hardened dies. These dies are produced at the Philadelphia Mint and finished by talented artists at the San Francisco Mint, giving them the attributes to create the collector grade coins produced there. (See how the SF Mint prepares dies.) A couple photos of Nixon dies appear below. 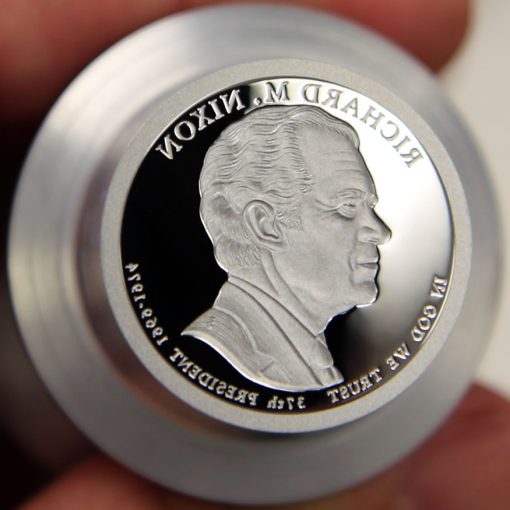 Also, see photos of Gerald R. Ford Presidential $1 Coins. An official unveiling of the Ronald Reagan dollar will not be offered until February 6, 2016, the 105th anniversary of his birth.

This is not a good likeness of Nixon.

I wonder if there would be a market for this coin, considering what he did while serving as president.

This is not a reverse proof? Doesn’t look like it so I presume 2015 was the only year for those, if so they should mature into a healthy premium as time goes by as there would only be 4 dollars with the RP format.

The side view is trying to make him look presidential. I guess that’s better than a full frontal picture; my grandmother always said she liked his “little beady eyes.”

Isn’t this a depiction of Bob Hope?

You are so right ! Bob Hope’s lost twin brother. Lol. This is the new U.S. Mint “Dick Dollar”