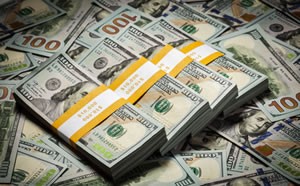 The United States government printed more banknotes for circulation in February than in January and during the same time last year, data from the agency responsible for manufacturing American currency shows. The combined value of the notes advanced sharply from the prior month but not from a year ago.

Nearly 506.9 million in $1s, $5s, $10s, $20s and $100s was printed last month for a total value of over $8.3 billion, according to Bureau of Engraving and Printing (BEP) monthly production figures published on Friday, March 20. In contrast, January’s totals tallied to just over 449.1 million notes worth about $6.3 billion while the year-ago February level summed over 400.9 million notes worth about $9.3 billion.

In month-over-month comparisons, February saw 12.9% more notes compared to January while their combined value jumped 32.6%. In other monthly comparisons, there were:

The number of $5s matched for a second straight month. BEP presses for $2s were silent. In January, $2s were printed for the first time since June. No $50s were made for a second month in a row after having logged three consecutive monthly gains.

Compared to a year ago, the number of notes grew by 26.4% but their combined value was 10.9% lower. The Bureau of Engraving and Printing should continue its pace increase. For 2015, the Federal Reserve has ordered 7.2 billion notes valued at over $188.7 billion.

Below are images of the BEP’s latest monthly production report. They show the type of banknotes manufactured in February at each printing facility:

In February, the BEP produced 1.28 million $100 star notes. These are indicated by the "*" designator in the money production chart directly above. Star notes are replacements for misprinted notes or certain serial numbers, like 000 000 000. Money collectors find them more desirable since they are rarer and more difficult to find.

I hope someone with more information can help me out, but I don’t see any reason that the value of notes in circulation can or would stay fixed. The “money supply” is far more than just banknotes – credit, loans, and other forms of non-cash transactions make up an enormous part of the economy. Transactions can shift among those forms seamlessly. For example, if (as is happening a bit) more retailers tack on a surcharge for credit payments, people could opt to pay with checks or bills. The total dollars transacted would actually drop by the value of surcharges thus… Read more »

The Feds seem to feel that a 2% inflation rate is good, the reasoning, as I understand it, being that this stimulates the economy. so more money–in many forms–would increase over time. Certainly the idea of just using gold and silver, satisfying as it may be to those of us who collect “hard” money, isn’t very realistic for the huge, global and incredibly complicated economy that exists today. Unfortunately that very system can be manipulated or become uncontrolled because it is so big. But just counting dollars to determine inflation isn’t enough (though granted if those numbers went completely crazy… Read more »

Talk to the flight crews hauling jumbo jet loads of palletized hundred dollar bills to the Middle East to buy off war lords. And to other parts of the world such as South Vietnam and Nicaragua in the decades prior. But actual physical currency is just the tip of the iceberg when you consider the trillions in un-supported electronic transactions taking place each year. There is nothing backing the U.S. government ponzi scheme other than the faith that since we’ve been here almost 250 years that it will always continue to be so. And compared to what, communist China or… Read more »

One of our greatest presidents Abe Lincoln said, A house divided against itself cannot stand.” It seems that the rest of the world has more faith in the United States than many Americans do. Whom ever started this rot within will bring us down without firing a shot. If debt is the problem then write all of your elected officials and make it your number one priority for them to address. Preaching to the choir will not change the course of the country. Make them listen to our Founding Fathers. A United Country with a wish to change. This change… Read more »