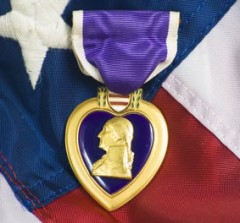 Commemorative coin legislation was reintroduced in the US House of Representatives to help in honoring the sacrifice of America’s servicemen and servicewomen who were killed or wounded in combat.

Similar to the previous version, H.R.3867, that was introduced a year ago but died due to inaction, H.R.358 calls for up to 50,000 gold coins, 400,000 silver dollars and 750,00 clad half-dollars that have designs emblematic of the National Purple Heart Hall of Honor. The bill’s language states that all the commemorative coins must be struck in the U.S. Mint facility at West Point, NY.

The Hall, located at the New Windsor Cantonment State Historic Site in New York’s Hudson River Valley and found online at www.thepurpleheart.com, opened on Nov. 10, 2006. Its mission is to collect and preserve the stories of Purple Heart recipients. These stories are preserved and shared through exhibits and videotaped interviews of the veterans themselves. It recognizes the more than 1.7 million U.S. service members wounded or killed in action ranging from the American Revolutionary War to the present day.

H.R.358 asks that sales of each coin include surcharges paid to the Hall to help finance the construction of a new building and renovation of existing facilities. Surcharge amounts include $35 per gold coin, $10 per silver dollar and $5 per half-dollar.

If this legislation passes in the House and Senate and gets signed by the President, the United States Mint would strike and sell collector proof and uncirculated versions in calendar year 2017. Currently, H.R.358 is sitting in the House Committee on Financial Services.

They should have done this during a big anniversary year like 200, 250, etc. To do it now would be a mistake as it would not draw as much attention.

I disagree. There is no time that the people of this country would not honor our military. The sacrifice our military men and women make is humbling. I for one cannot thank them enough. For the ones who have given the ultimate sacrifice, a mere coin or ribbon is nothing. Anytime is a good time to honor those who have given their all.

I think the honor is receiving the purple heart, not buying a commemorative coin that celebrates the medal.

agree with jim… the honor IS the medal and the attending presentation…. some families of recipients may want the coin, but what does it add to the honor…?
I guess it’s a big deal for a member or members of Congress to get a coin approved but, really, don’t they have more urgent business to attend to?