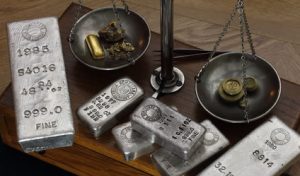 Gold scored another four-month high on Tuesday, extending a string of wins to three sessions.

"People are concerned about U.S. economic growth, and that’s why many people have turned bullish," Adam Klopfenstein, a senior market strategist at Archer Financial Services in Chicago, said in a telephone interview according to Bloomberg. "Gold is also finding some support from the ongoing political turmoil" in Ukraine, he said.

It looks as if the U.S. Mint was able to build on its inventory of 2014 American Silver Eagles as sales moved up another 346,000 after rising 825,500 on Monday. The two-day total of more than 1.17 million is the strongest since the newly dated coins debuted on Jan. 13, 2014. The Mint has rationed sales of 2014 Silver Eagles since that launch.

Higher gold prices seem to be pressuring sales of the Mint’s gold bullion coins as no gains have been published for the week so far.

Below is a current sales breakdown across all the bureau’s bullion products.