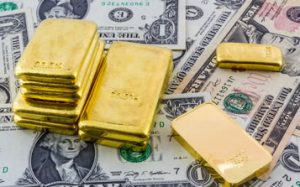 Gold closed lower on Friday and for the week, snapping a streak of five weekly increases, but it still notched a solid 3.1% gain in January — its first monthly pick-up since August.

In returning to precious metals, gold for April delivery shed $2.70, or 0.2%, to settle at $1,239.80 an ounce on the Comex division of the New York Mercantile Exchange. It dropped 1.9% on the week. For the month, gold tended to move opposite of equities and the U.S. dollar.

That the rotation back to precious metals from equities has lost momentum is "partially due to month-end profit taking and also because of a modestly stronger U.S. dollar today with taper progressing after FOMC statement," MarketWatch relayed and quoted Jeffrey Wright, managing director at H.C. Wainwright.

Most participants in Kitco News’ gold survey were bullish last week. Until then, the majority had accurately predicted gains in gold since missing the first of five weekly gains that began toward the end of December. Despite losses this week, participants remain bullish overall in the latest Kitco survey.

"In the Kitco News Gold Survey, out of 33 participants, 21 responded this week. Eleven see prices up, while seven see prices down and three see prices trading sideways or are neutral," reports Kitco.

Another said the market is handling the Federal Reserve’s tapering of quantitative easing well."

Silver prices closed lower for a second straight week, down 3.3%, after advancing in the four prior weeks. On Friday, silver was nearly unchanged with the contract for March delivery down about a half penny to $19.12 an ounce. In January, silver shed 25 cents, or 1.3%.

In PGM futures on Friday:

London precious metals fixings split on Friday and in January. All declined on the week. When comparing the London fix prices from Thursday PM to Friday PM:

January U.S. Mint bullion coin sales soared from December but paled against the tallies from a year ago. January tends to be an exceptionally strong month for the U.S. Mint with releases of newly dated coins. In major comparisons:

Below is a sales breakdown across all United States Mint bullion products with columns offering the number of bullion coins sold this week, last week, in January 2014, December 2013 and in January 2013.

CoinNews.net - June 24, 2022 4
Gold advanced for the first time in five sessions on Friday, but just by a smidgen. Prices for silver and platinum were also little...