Each U.S. Mint facility is unique and exciting, as Mike and Darrin Unser of CoinNews.net discovered in their visits. The tour of the Denver Mint provided its own treasure trove of memories for the men, and it was caught on camera. 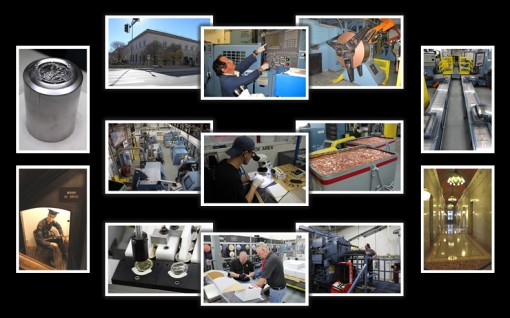 A bit of enchantment occurs in watching the whirling of machinery and all the robotic movements during every process of coin production, so when you re-read the articles, as I have, you come to appreciate the vast amount of detail at which the men were able to recall. To wrap up the behind-the-scenes look at the Denver Mint, Darrin and Mike give their final comments, followed by a composition of photos from their visit.

Mike: It’s impossible not to sound like a broken record when talking about all the people we’ve encountered at the U.S. Mint facilities in San Francisco, West Point, Philadelphia and now Denver. The same words come to mind after you leave any one of the plants and think about those you’ve met — professional, smart, dedicated, driven, competitive, and fun… to name a few. They have an enviable working environment and culture that you’d more expect from a smaller family owned business, not from a large government bureau with revenue last year of more than $4.3 billion.

Darrin: I would have to agree! It was completely overwhelming to find such a close-knit culture in what is really a large-scale manufacturing operation. Each person we spent time with not only took pride in their own part of the process but seemed to also revel in the improvements and accomplishments of the entire facility.

Mike & Darrin: For making our visit possible and so enjoyable, we’d like to give a big THANK YOU to Tom Jurkowsky, U.S. Mint Director of Public Affairs; David Croft, Acting Associate Director for Manufacturing; Randy Johnson, Chief, Die Manufacturing Division; Jennifer DeBroekert, Public Affairs Specialist; and Thomas Fesing, Public Affairs. And, of course, the special folks who made the time to talk and show us what they do.

Below are photos that we’ve presented in our series of articles about the Denver Mint. The photos are categorized by section titles with those titles linked to the original article. If any photo catches your attention, those links are the best resources for more information. Often times, there are videos in the original articles that offer further and better clarity — especially for the die production, coin production and numismatic packaging operations.

Our first major piece on the U.S. Mint facility in Denver focused on its free, public tour, with later articles about the production process seen during our private tour. These first photos are just a sampling of what you’d see when taking the public tour.

Our next article in the series showed how dies are produced at Denver. Dies, cut from rods of steel, are hubbed to take on coin designs, shaped to fit in coining presses, and heat treated for strengthening to withstand the pressure of striking blanks to make coins. The link above offers full details, here are photos with summary information.


A laser machine is then used to burn serial numbers into the newly shaped coin dies.


Coin dies then go through heat treatments to harden and improve their resiliency.

When dies are first shaped they have a small amount of extra material called grinding stock. This extra material is needed because dies swell and grow after hubbing and heating. A machine grinds dies after heat treating to their final shape and size.


Another round of inspection is performed. The dies are also cleaned and polished. They are then ready for coining presses.

Our next article in the Denver Mint series showed how coins are produced for circulation. It described how blanks are cut from rolls of steel, how blanks are heat treated, cleaned and then go through machines to add rims and become planchets. Planchets are shown getting struck in coining presses to become coins. Finally, the article showed how the coins are packaged into bags for shipment to Federal Reserve Banks. The link above offers full details. Here are the photos that were in that article.

Coin production operations start where they will end, at the loading dock. There, pallets of metal coils are unloaded and then moved to short term storage on racks. It is these coils from which coins for circulation are made.

Large presses produce blanks by cutting them from coils of metal.

The next stage is for the coin blanks to go through annealing furnaces which both softens the metal and strengthens it.

Here are some photos of the annealing and washing stages.


United States Mint facilities do not create blanks and resulting planchets for Lincoln cents. Those are outsourced. Bins of planchets for cents are delivered to the Denver Mint.


Planchets that are made or received, move to Coining Presses on conveyors. Planchets are fed on demand into the presses.

After pressing, the coins drop into a catch box to await manual inspection.

One coin in the catch box from each production run is checked for flaws before the batch is let loose for packaging. If the coin has an error, the entire lot is scrapped. They end up in a waffle machine, which destroys their designs.

If the coin passes inspection, the press operator pulls the trap on the catch box and the coins fall onto a conveyor and travel to rooms for counting and packaging.

Bulk bags go into storage in the vault, readied for shipping.

The next stop is the loading docks, which is where the process all started. What came in as rolls of metal now goes out as coins and scrap. The coins eventually make their way to Federal Reserve Banks and finally to financial facilities around the country.

Our next article described how the U.S. Mint at Denver makes annual Uncirculated Coin Sets, or Mint Sets. The title above offers full details, here are photos with summary information.


Clear blisters are used to hold coins in place and protect their surfaces.


A stop and go conveyor system moves the packs to coining stages that are identified by denomination.


Blister packs must be flipped shut and sealed after all 14 uncirculated coins are set into position.

Each sealed blister pack is inserted into a red folder that includes artwork, Denver labeling, specification of the coins and a U.S. Mint Certification of Authenticity. This happens automatically, as seen in a video from the original article.

At the end of the line, uncirculated coin sets are inspected and placed into boxes for temporary storage.