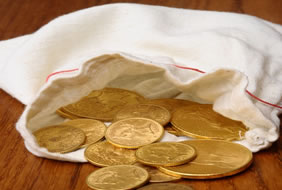 Gold, platinum and palladium finished lower for a second straight day while silver advanced its losing streak to four sessions.

Gold’ settlement price was the lowest since July 8, though it was a tad higher than the low hit during after-hours trade on Wednesday after the release of minutes from the Fed’s last policy meeting.

"The U.S. Federal Reserve’s Open Market Committee minutes were deemed somewhat hawkish by the market place and that helped to sink the gold and silver markets," said Jim Wyckoff, a senior analyst at Kitco Inc, in a daily note.

"However, there is still a large contingent of market watchers who said the latest FOMC minutes revealed not much new and said any Fed tapering move will first have to see better U.S. jobs data."

In PGM futures on Thursday:

On Monday, all U.S. Mint bullion options advanced. On Tuesday, sales increased for all but one of the Mint’s silver bullion coins. On Wednesday and Thursday, sales climbed for the Mint’s one-ounce gold coins. Sales breakouts for the day, week-to-date, for the month through Nov. 19, and the year-to-date are listed below.