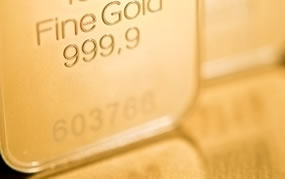 Gold turned higher Monday for the first time in a week, rebounding from a three-month low.

Gold did retreat from earlier highs as progress was reported in U.S. Senate negotiations to reopen the government and avoid a default.

"All parties are desperately trying to avoid default but remain far apart on the solution," MarketWatch quoted Edmund Moy, chief strategist with gold-backed IRA provider Morgan Gold. "As discussions between the president and Congress intensify before this week’s potential default, expect gold prices to be very sensitive to every little bit of news on progress or the lack thereof."

Last week, gold fell 3.2% and ended at its weakest closing price since July 10.

In other precious metals futures for Monday:

Palladium also advanced last week, up 1.6%. The other metals registered losses of 2.3% for silver and 0.9% for platinum.

Like bullion futures in New York, palladium was alone last week with its pick-up of 0.8%. The other precious metals fixings logged weekly declines of 3.4% for gold, 0.6% for silver and 1.2% for platinum.