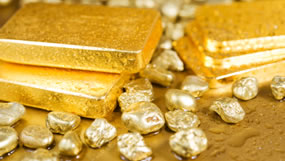 "Worries about the U.S. government shutting down are pushing people to gold," Phil Streible, a senior commodity broker at R.J. O’Brien & Associates in Chicago," said in a telephone interview according to Bloomberg.

"Silver futures prices showed little to no reaction to news Wednesday around midday that the U.S. government (Commodity Futures Trading Commission) closed its years-long probe into manipulation of the silver futures market, saying it had no hard evidence that such had occurred," added Wyckoff.

London bullion fixings advanced across the board for the first time in four days. When comparing the Tuesday PM to Wednesday PM London fix prices: