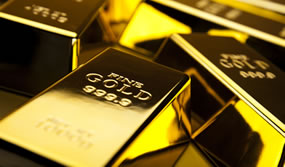 Gold and silver prices settled lower in normal trade Wednesday, then shot sharply higher in extended trading after the Federal Reserve unexpectedly announced that it was sticking with its stimulus program.

"Taking into account the extent of federal fiscal retrenchment, the Committee sees the improvement in economic activity and labor market conditions since it began its asset purchase program a year ago as consistent with growing underlying strength in the broader economy," the Fed said in a statement.

"However, the Committee decided to await more evidence that progress will be sustained before adjusting the pace of its purchases."

"Gold is rallying as the Fed is not exiting its stimulus program. We are going to have cheap money and low interest rates for a long time," Reuters quoted Axel Merk, portfolio manager of California-based Merk Funds

"This is a game changer, and some of the money that ran away because of tapering fears will be back," Michael Gayed, the chief investment strategist who helps oversee $270 million at New York-based Pension Partners LLC, said in a telephone interview according to Bloomberg. "We are seeing the bullish sentiment return."

The PGM’s were also sharply higher in extended trading with platinum above $1,463 and palladium near $718.