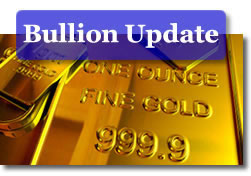 Gold advanced for the first time in three days Monday, supported by weakness in the U.S. dollar which had curbed the yellow metal’s appeal for much of last week when prices fell 1.6%.

"Higher physical demand in China is good news for the market," Sterling Smith, a commodity analyst at Citigroup Inc.’s institutional client group in Chicago, said in a telephone interview that was relayed on Bloomberg. "The mildly weak dollar is also positive."

Platinum and palladium are still considered to offer positive supply and demand fundamentals and to play an indispensable role in the world’s modern economies. Investors have begun rounding out their gold and silver portfolios with the so-called "noble" metals as a matter of necessity. This is not some kind of "diversify or die" panic-driven investment, but, rather a "diversify the pie" prudent, and potentially profitable, calculated move.

The following are the latest daily, July and year-to-date bullion coin sales totals as published by the U.S. Mint.

The above United States Mint bullion coin sales are in coin totals, not the amount of ounces sold.