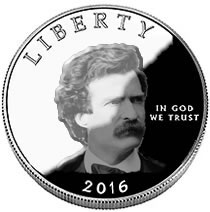 Last week, Senator Richard Blumenthal [D-CT] of Connecticut introduced legislation that calls for gold and silver commemorative coins during calendar year 2016 to celebrate the life and legacy of Mark Twain.

Mark Twain, the pen name used by Samuel Clemens, wrote many books that are still in print after more than a century since his death in 1910. Two of his most noted novels include The Adventures of Tom Sawyer and its sequel The Adventures of Huckleberry Finn. Twain became one of the best known authors in America and abroad, with his books being translated into 75 languages.

The legislation, known as the Mark Twain Commemorative Coin Act and numbered S. 1929, would authorize surcharges from the sales of the proof and uncirculated numismatic coins to go towards four institutions that promote Twain’s legacy.

"Mark Twain is an American icon with deep roots and a proud history in Connecticut," said Blumenthal in a news release issued Friday. "People of all ages from every corner of the globe seek to learn from Twain’s literary works, wisdom, and wit each day. This bill commemorates his cultural and historic legacy and empowers those organizations most committed to preserving it."

It is not the first time members of Congress have tried to honor Mark Twain on commemorative coins. Similar legislation was proposed separately in the House and Senate in February 2009 during the 111th session of Congress. Before that, a bill made its way into the House in September 2008, the 110th session of Congress. These bills all died in committees. Presently, another similar bill is sitting in a House of Representative’s subcommittee. Numbered H.R. 2453, it was introduced by Rep. Blaine Luetkemeyer [R-M09] on July 7, 2011.

The latest Senatorial version of the Mark Twain Commemorative Coin Act calls for coin specifications that have become standard for modern U.S. commemorative coins. For the $5 gold coins, the bill dictates a diameter of 0.850 inches and a weight of 8.359 grams. Each commemorative would have a composition of 90 percent gold and 10 percent alloy. The maximum mintage of the gold coins in this bill would be 100,000.

For the commemorative coins composed of silver, the guidelines include a denomination of $1 with diameter of 1.50 inches and a weight of 26.73 grams. Their composition would be 90 percent silver and 10 percent copper. Not more than 350,000 of the $1 coins would be struck.

The design requirements simply states the coins’ images be "emblematic of the life and legacy of Mark Twain." The typical inscriptions would include the coins’ value, year, and the words Liberty, In God We Trust, United States of America, and E Pluribus Unum.

Commemorative designs would be reviewed by the Citizens Coinage Advisory Committee and then selected by the Treasury Secretary after consultation with the Commission of Fine Arts and the Board of the Mark Twain House and Museum in Hartford, Connecticut.

The Mark Twain House and Museum in Hartford, Connecticut, is the restored home where the author and his family lived from 1874 to 1891. One of its missions is to demonstrate the continuing relevance of his work, life and times.

Surcharges and Status of Act

Also standard for commemorative coin legislation is a surcharge for each one sold. The gold coin is assigned a $35 surcharge and the silver coin a $10 charge. Together the funds raised would support:

The Mark Twain Commemorative Coin Act currently has seven cosponsors and stands before the Senate’s Committee on Banking, Housing, and Urban Affairs. In order for S. 1929 to become law, it must pass in the Senate, the House and then get signed by the President. The other option is for the House version, H.R. 2453, to make it through the same steps. This bill currently has the cosponsor support of 35 members and resides in the Subcommittee on Domestic Monetary Policy and Technology.

As a side note, Mark Twain was featured in 1981 on gold medallions produced by the United States Mint under the American Arts Gold Medallion Act. The medallions were a part of series which commemorated ten celebrated American artists, architects, writers and performers.