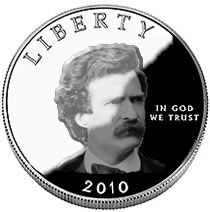 Rep. John Larson and five other House members proposed on Friday gold and silver coins emblematic of the life and legacy of Mark Twain.

Mark Twain was the pen name for Samuel Clemens, whose many works are still mostly in print after nearly a century past his death in 1910. Clemens is one of the best known Americans in the world with over 6,500 editions of his books translated into 75 languages.

The commemorative uncirculated and proof coins for collectors would be issued in 2010, which is the year marking both the 175th anniversary of Mark Twain’s birth and the 125th anniversary of the publication of Adventures of Huckleberry Finn.

The legislation, named the Mark Twain Commemorative Coin Act, H.R. 7152, calls on the Commission of Fine Arts and the Board of the Mark Twain House and Museum to collaborate in the design for the coins. Those designs would then be reviewed by the Citizens Coinage Advisory Committee with the final selection made by the Treasury Secretary.

The Mark Twain Commemorative Coin Act includes surcharges of $35 per gold coin and $10 per silver coin that would be distributed as follows (taken directly from the bill’s language):

(1) 1/2 of the surcharges, to the Mark Twain House & Museum in Hartford, Connecticut, to support the continued restoration of the Mark Twain house and grounds, and ensure continuing growth and innovation in museum programming to research, promote and educate on the legacy of Mark Twain.

(2) 1/6 of the surcharges, to the Mark Twain Project at the Bancroft Library of the University of California, Berkeley, California, to support programs to study and promote Mark Twain’s legacy.

(3) 1/6 of the surcharges, to the Center for Mark Twain Studies at Elmira College, New York, to support programs to study and promote Mark Twain’s legacy.

(4) 1/6 of the surcharges, to the Mark Twain Boyhood Home and Museum in Hannibal, Missouri, to preserve historical sites related to Mark Twain and help support programs to study and promote his legacy.

For a listing of other coin legislation passed or under consideration for this year, visit Coin Legislation, Acts and Laws.

I think this is a wonderful idea! I found a post about Mark Twain on Peterman’s Eye today and I thought I’d share it…

CoinNews.net - May 19, 2022 0
Australian bullion sales in April jumped for products struck in silver and slowed for those minted in gold, the latest figures from The Perth Mint...