We start this morning with pop-quiz and a telling image (hint: it is not Ben Bernanke’s EKG when he announced "Operation Twist"). So, can you name the asset whose volatility is shown below and would you place a large chunk of your estate into it? 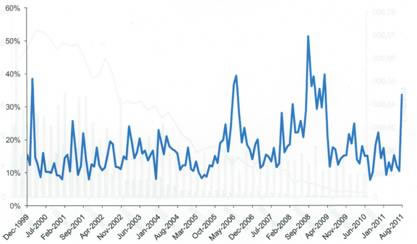 The answer will be available at the end of this article.

Selling of commodities intensified overnight after a brutal day on Thursday. Gold prices fell by more than $50 per ounce as they penetrated previous "must-hold" support numbers at the $1,702-$1,705 area, and traded as low as $1,683.00 during the early morning hours.

Spot New York bullion dealings opened at the $1,686.90 level on the bid-side on Friday, showing a loss of $49.30 per ounce as persistent selling and the "get me out by day’s end" Friday patterns remained in evidence.

The breach of the pivotal support zone opens up the possibility of soon seeing $1,680 (today?), then $1,650 and then $1,580 gold or lower (like $1,480). We won’t cover the technical damage in this post but will safely say that damage to sentiment is as obvious as an elephant in church might be. This, despite the by-now-normal knee-jerk "damage control" statement from yet another mining firm CEO who this morning declared that $2,200 gold is still in the cards (only now the timetable has been pushed back to 2012… ).

Silver added another 9.6% loss this morning to Thursday’s near 10% decline and fell by more than $3.5 per ounce, to levels as low as the $32.40 mark before the New York markets opened for trading. The opening bell had silver off by $3.07 at the $32.77 bid quote. Should the low $30s fail to hold in the white metal, then one might be faced with the prospect of $25 silver in the not-so-distant-term.

Platinum and palladium also continued their sell-offs with the former opening $50 lower at $1,632.00 the ounce and the latter unchanged at the $647.00 level. No changes were reported in rhodium. Analysts at Standard Bank (SA) commented on the PGM sector this morning and offered the following opinion on its current status:

"According to our cost of production analysis, $1,700 [Pt] and $700 [Pd] represent a good buying opportunity for platinum and palladium, respectively. However, these levels were obtained with the ZAR at 7.00 against the dollar, and we did highlight that a depreciating ZAR would erode this support.

The current upheaval in financial markets has seen the ZAR depreciate rapidly, currently trading around 8.25 against the dollar. Taking this into account, we now see support from a cost of production perspective for platinum and palladium, at closer to $1,600 and $600, respectively."

Copper, on the other hand dropped another 4.3% and left specs wondering what kind of economic… weather the bellwether orange metal is prognosticating right about now. Black gold dropped $2+ to trade at $78.50 per barrel. What was up today? The dollar was, once again; it traded at 78.40 on the trade-weighted index.

Recent happenings in the gold and silver markets appear to point to something that was willfully ignored by perhaps too many profit-imbued speculators; that when push comes to shove (and there is a "whole lotta shovin’ goin’ on" these days) the US dollar reasserts itself-with a vengeance. Ultimately, the depth and the liquidity of the US bond market-at a juncture where everything else looks pretty much like… junk- makes for a "lesser of all evils" condition that results in the type of moves you have seen here (and there) of late.

There came the time this week when even the Swedish and Norwegian Krona and Krone were… de-crowned by the "King Dollar" which took its throne back in a market coup of epic proportions. While it is hard to be a full-fledged greenback apologist (with all of the problems still manifest in the US), the reality is that-as Brown Brothers Harriman & Co. puts it:

"with increasing chances that the Bank of England may expand its quantitative easing and likelihood that the euro zone’s debt troubles may push the European Central Bank to cut rates by the end of this year, the dollar appears to be more attractive as an alternative."

Commenting on the current gold market in its most recent missive, the analysts at CPM Group New York caution that despite expectations that investors will continue to be attracted to gold for possibly the next decade, prices are likely to remain at or near current levels and not spike to outer space. CPM notes that:

"all of the gold market observers who are convinced that gold prices can only rise need to consider the unpredictable and variable relationship between gold in-vestment demand and prices, as the dependent variable, and overall economic uncertainty or chaos."

"Economic problems do not assure higher gold prices. History, including recent history, has provided ample examples of periods of time when the collective wisdom of the gold market was that prices had no way to move but upward, only to find that gold prices indeed could decline even in the face of severe economic problems."

The article offers two recent examples of why and when "conventional" wisdom has been proven incorrect; the period of from 1980 to 1982 and the following one-year period into the end of 1983. Details are available (and we urge you to read them attentively) at this location on the Kitco website.

Well, at least one other source got it right when it comes to describing the situation that gold has gotten itself into in recent years. Barclays Capital, via its managing director of commodities, Kevin Norrish, stated that:

"The changing makeup of gold investment makes the metal more vulnerable to steep losses if sentiment toward the metal sours."

A preview of such curdling sentiment is now on display. We have for many moons cautioned that the rise of gold-backed ETFs was a double-edged sword that worked very well and gave much additional juice to rising gold values but has the potential to aggravate declines in an equally (if not more) leveraged fashion.

Even though the firm maintains its view (the one that envisions gold still touching the magic $2K figure in 2012) the caution signal it offers small retail investors is to be ignored only at one’s own financial peril:

"You now have a very sophisticated investor base [read: hedge funds] with very large [read: really, really large] positions, so when things start to change [read: and it will] , you could start to see a lot [read: several hundred tonnes] of gold dumped on the markets. When the opportunity cost turns negative, you could see a problem [read: prices we cannot mention here].”

Calling "Houston" to report such a problem might not work for investors who overloaded in gold way too late in the game. Most importantly, the presence of the carnivores at this party (since the roughly 2004 era) has turned gold into that which it surely wasn’t expected to be: a volatile, unpredictable asset whose presence in large proportions in a portfolio (say, beyond 15%) can offer unpleasant palpitations to the portfolio and to its owner. Here, now, the graphic answer to the day’s quiz: 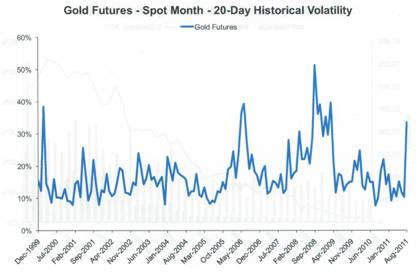 All Images courtesy of the CME

Have a boring weekend, please. The week has already offered enough excitement.