With Friday‘s price action in precious metals and crude oil was largely defined by repeated attempts to recover some of the sizeable damage that profit-takers inflicted upon them in after-hours trading.

Gold prices on the spot market gyrated quite violently (and in varying directions) this morning (the range was from $1,398 to $1,413) albeit the $1,400 mark was maintained for the time being.

"a combination of reduced investor appetite amid improved macroeconomic sentiment and rising interest rates suggests duller times ahead for gold. The tightening cycle, which is already under way in emerging economies and which we now expect to kick in sooner than expected in the West, does not bode well for gold either," the Barclays analysts said in a Friday morning market note.

The situation was largely similar in silver, where a wide trading range was once again on display (from $32.52 to $33.19) along with the usual plethora of explanations as to why this was the case. Certainly lacking from the list of such explanations was the one clarifying why silver should gain 83 cents on the back of a weaker than anticipated US Fourth Quarter GDP figure (reported at 2.8% as against expectations of a 3.2% growth level). Offsetting some of the negativity arising out of the GDP report, the University of Michigan/ Thomson Reuters survey revealed that the American consumer’s sentiment has risen to a three-year high this month.

As for platinum and palladium, any shrinkage of the fear/greed premium in crude oil (it was last seen trading at $97.20 per barrel) was seen as rather helpful to the complex. The logic is that if oil returns to more or less ‘normal’ price levels then automotive sales might not take the hit that was being factored in just a day or two ago and reflected in the huge slump in the two metals. The slight erosion of the fear premium manifest in oil helped the US dollar gain some ground on the trade-weighted index this morning.

The former gained $10 to reach $1,791.00 per ounce and the latter rose $15.00 to touch the $788.00 mark the ounce. The same Barclays snapshot analysis we referenced above observed that there is scope:

to "maintain a positive outlook across platinum and palladium as market balances are set to tighten this year on the back of slower palladium stock releases from Russia, modest supply growth from South Africa and continued recovery in industrial demand."

In any case, with the situation in Libya not yet resolved, some degree of uncertainty continued to be manifest in global markets but speculators were also seen taking more of a "wait-and-see" attitude following the realization that temporarily interrupted oil supplies from Libya do not automatically mean a return to global economic crisis conditions, and that Libya not pumping black gold is not the same as, say, Saudi Arabia or Iran not pumping it.

Although Iran (despite thus far successful efforts to suppress domestic unrest) still remains at some risk of contagion from the types of movements that have resulted in the departure of Mubarak and will soon result in the toppling of the Gaddafi regime, Saudi Arabia’s King Abdullah has taken certain "steps" intended to keep his subjects less likely to feel the urge to take to the streets of Riyadh. Volatility and intense displays of quickly-shifting sentiment in the oil market (and its effects on gold were unmistakable yesterday) were both reflected in the widest price-swings in more than a year on Thursday.

President Obama has stated that the US could weather the situation from its reserves, and Saudi Arabian Oil Minister Ali al-Naimi has made assurances that his country could ratchet its daily oil production up by 50% or so (about 4 million barrels), if conditions require it. The International Energy Agency based in Paris, France has also come out and said that emergency stockpiles of crude could be tapped in the event of need.

None of the above however has prevented speculators from being able to push black gold to a two-year high this week, or from sending their minions out to talk about some imminent oil "Armageddon" over the financial media’s airwaves. However, certain chart followers see the return of oil to the $103.41 level on Thursday as a 61.8% retracement of the commodity’s major decline from $147.27 peak to the low of $33.55 and caution that it represents a "critical level" – one that might imply a corrective top and potential decline.

Meanwhile, don’t look now, but our old "friends" – the hedge funds are (not so quietly) bailing out of the most recent "darling" of many a commodities-oriented newsletter: the agricultural complex. Over the past week, wheat prices have cratered by nearly 9% and corn and soybeans were not very far behind it. The switch away from edibles into oil and gold during this period was as obvious as a fully-dressed Waldo would be at your average nudist colony.

Continuing of the emergent theme of central bank tightening (we mentioned Messrs. Trichet, Plosser, Bullard, etc. and made references to China, India, Australia, and others in recent articles), the Bank of England’s Mr. Andrew Sentence has apparently…sentenced ultra-low interest rates to a slow death as he reiterated the need to raise the same sooner, rather than later, in an effort to avoid sudden/sharp hikes which could have certain undesirable effects: "the risk of delaying interest- rate rises too long is that this gradual approach may cease to be an option in the future."

Russia’s central bank was two steps ahead of Mr. Sentence’s words with its concrete action this morning, as it "surprised markets by using its full range of weapons to tighten monetary policy, sending a strong signal that it views rising prices as a greater threat than slow economic growth. It raised all of its key interest rates by 25 basis points."

We thus view the Barclays cautionary commodity markets comments based on perceptions (and emergent realities) of rising interest rates as being validated by policy.

Finally today, a gripping report by Marketwatch about the findings of British firm Maplecroft when it comes to the risks which investors might face when plowing oodles money (and hope for "insatiable" demand for commodities) into certain high-risk locations around the world. The report and the map raise questions about, and throw a certain amount of sobering cold water upon, the incessant chants, that, for example, India is an "incredible, no-lose" proposition or that Russia is "rife with opportunity." Some serious attitudinal ‘adjustments’ could be in order, if in fact certain scenarios to which Maplecroft alludes, materialize. Caveat investor. Here is how the world looks to Maplecroft today: 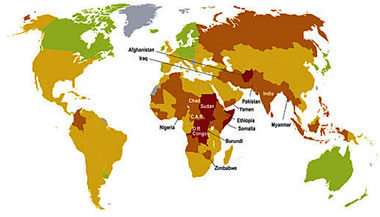 In Maplecroft’s assessment, India is:

"rated at ‘extreme risk’ for security, as it faces simultaneous threats of terrorist attacks from militant Islamic extremists and Naxalite Maoist insurgents. However, its poor ranking also reflects a lack of societal resilience. Despite robust growth, the country has a poor human rights record and large sections of the population lack access to basic social infrastructure such as education, healthcare and sanitation. This reduces the country’s resilience to ‘global risks’ by creating a less productive workforce, a population susceptible to the spread of disease, and potential instability due to risk of social unrest."

Have a peaceful weekend. Canada looks mighty…green despite its alias containing the word "white."