The coin cover includes two circulation quality dollar coins mounted on a display card inside an envelope with a U.S. 44-cent Flag postage stamp. Each Ulysses S. Grant dollar is specially chosen from the first day of production. The US Mint facility in Denver produced one of the strikes on March 2, 2011, and Philadelphia’s US Mint facility struck the other on March 7, 2011.

On the front of the coin cover is a portrait of the president with the American flag. Each issue is postmarked May 19, 2011, St. Louis, MO, to mark the day that the Ulysses S. Grant $1 Coins were released into circulation. 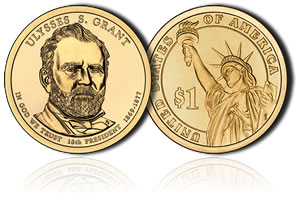 President Grant’s dollar is the second for the year and the 18th in the Presidential dollar series that started in 2007. The Mint began selling Ulysses S. Grant dollar 25-coin rolls on May 19, the same day as the Federal Reserve Bank started distributing the dollars into circulation.

The obverse or heads side of the $1 was designed and sculpted by Don Everhart. It depicts a portrait of the president and the inscriptions "ULYSSES S. GRANT," "IN GOD WE TRUST," "18TH PRESIDENT" and "1869-1877."

Everhart also designed the image of the Statue of Liverty shown on the reverse of all Presidential $1 coins.

Ulysses S. Grant became famous in the military and gained much recognition during the Civil War. Not long after the war he was elected President and served from 1869 to 1877. Later her wrote a book to help support his family, and it is still touted as one of the best military autobiographies of all time.

The following are biography excepts of Grant as provided on the United States Mint website:

Born in 1822, Ulysses S. Grant was the son of an Ohio tanner. He went to West Point and fought in the Mexican War under General Zachary Taylor. At the outbreak of the Civil War, Grant was appointed to command an unruly volunteer regiment. By September 1861, he had risen to the rank of brigadier general of volunteers. President Lincoln later promoted him to major general of volunteers. After he won battles at Vicksburg, Miss., and Chattanooga, Tenn., Lincoln appointed him general-in-chief in March 1864. Finally, on April 9, 1865, Confederate General Robert E. Lee surrendered.

As the symbol of Union victory during the Civil War, General Ulysses S. Grant was the Republican Party’s logical candidate for President in 1868.

The happiest day of the Grant presidency was May 21, 1874, when his daughter Nellie was married in an extravagant White House wedding. After retiring from the presidency, Grant learned that he had cancer of the throat. At the suggestion of author Mark Twain, he started writing his memoirs to help pay off his debts and provide for his family; Personal Memoirs of U.S. Grant became a best-seller.

The next and final Mint product to feature Grant this year will be the Grant Presidential $1 Coin & First Spouse Medal Set, coming July 7.

Upcoming and Past US Mint Presidential Product Releases 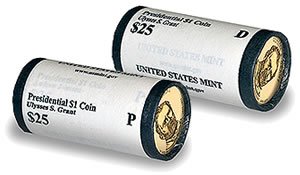 Presidential dollars are produced for use in daily transactions. The United States Mint has published the Grant $1 mintage figures. The coins have a combined Philadelphia and Denver mintage of 76.02 million, making them the fourth least produced in the series. Their combined mintage trails behind the:

The coin covers may be purchased directly from the United States Mint website at:

In addition to the $19.95 price, a domestic order is charged a $4.95 shipping and handling fee. No household limits are in place, meaning buyers can order as many as they like.

The covers may also be ordered using the Mint’s toll-free number, 1-800-USA-MINT (872-6468). The Mint has not indicated when it expects to begin shipping orders, which usually indicates a product is in stock and that it will be delivered in quick fashion.

How do I identify the mint on the Presidential coins?

Melvin, the mint mark is located on the edge of the coin, along with the year and “E Pluribus Unum.”

Wanted to if this coin is copper or gold

just want to know what this coin is worth

my mom has one

Just want to know what this coin is worth

A regular coin found in circulation is worth just its face value, which is $1.