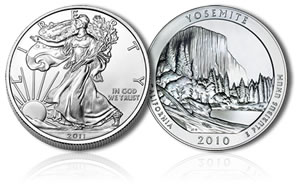 Collectors returned to buying coins in larger quantities last week — especially silver coins. The latest US Mint sales figures pegged 61 numismatic products as having outperformed their previous weekly gains. That compares to 21 products from the prior report and 17 from the time before that.

Next week marks the September 11 Medal release. That will attract substantial interest around the nation — not just from coin collectors, and should lift sales for other US Mint collector products in the process.

The following tables offer the latest bullion and numismatic product sales figures as provided by the United States Mint:

*The as of date for US Mint bullion coin sales is Wednesday, June 15, 2011, except for the ATB 5-ounce coins which is Thursday, May 26. 53,000 of the 2010-dated 1 oz Gold Eagles remained for sell this year, and buyers must order one of them for every four of a newly dated issue. The bullion sales figures also include 469,500 of the 2010-dated Silver Eagle coins sold in January.